What was your first knife?

Forum rules
There are a few things you should know before posting in these forums. If you are a new user, please click here and read carefully. Thanks a lot!
Post Reply
35 posts

This week I found a new knife FH81 from Ganzo on Amazon https://www.amazon.com/stores/node/1615 ... ageIndex=2, it has a reptilian design.
I hadn`t seen it before in Ganzo series, that`s why I ordered it and it`s fantastic

What does this have to do with your first knife? It has always been obvious you are a shill for Ganzo knives and probably just trying to advertise your Amazon store. Why not just come out and say it?

PS- I will save Sammy the time and just post his usual reply to you that he also likes Ganzo knives...lol

My first real 'knife' was a birthday present from my brother, a serrated all-stainless Moki lockback, 'Made in Japan'. Dunno what kinda steel, but it's never been sharpened, and as a boater am amazed it still cuts sisal rope and poly line as good as when I first got it over 10 years ago.

My Dad had a workbench, a desk, in the top drawer was several folding manual double blade knives.
My first own real new knife was a brown shell wrap Kamp King multi-blade.
But I had many X-Acto knives and "used" Barlow Knives. . . Dad had a Barlow collection. . .he gave us the ugly cheap ones.

I went to carve Pumpkins at my friends house, His dad left the room and came back with a pantyhose over his face distorting it.
and he slashed at a pumpkin with an 8 inch Latama picklock automatic..
the story is in an early issue of the late Sheldon Levy's Automatic knife Newsletter, I drew a jack-o-lantern with vines for arms and legs.
The internet was not yet available, so I incorrectly remembered it as " Latma" . . .

I went home and told my Dad. . .he gave me a brown swirl snappy. I had it many years. I don't know where it went.
I think my younger brother had it. . . My Mom may have thrown it away. . due to a "School / knife possession" episode I had Later.
I got frisked by her when I went to school after 9th grade. . .She sawed up several knives. . I found pieces on the floor.

Eventually my Dad gave me an Edgemaster Metal scales Paratrooper knife he got at the PX in Kansas, after the war was over for him.
(he was a rifleman for an artillary emplacement in 1944) . . his hearing was blown out from a loud explosion.
I estimated the knife to be 1935. . . .I could be wrong.
He was a coal miner, a soldier, a fork lift operator, and finally a Draftsman. . . He free lanced Cartoons, and wedding signs.
It's not really G.I.Joe issue. . . he put on a beer bottle opener. . . .
and he also gave me an 11 inch manual picklock " Made ITALY "


It's boxed up and plastic wrapped somewhere. . .but at the time. . .I took it to the Local Public Library and Xeroxed it.

The snappy belongs to someone else, I forgot who. . . .but the Edgemaster is actually the Library Xerox of My Knife.
I look at the Xerox, all grainy. . .and think of my late Father. passed away the summer before John Lennon was shot. 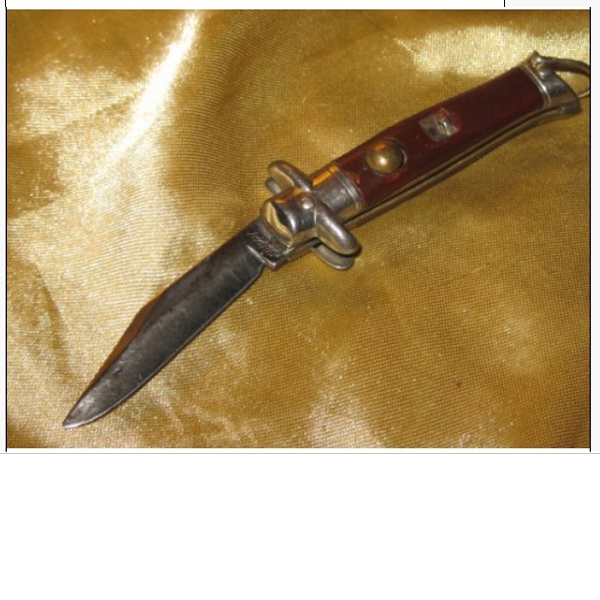