Forum rules
There are a few things you should know before posting in these forums. If you are a new user, please click here and read carefully. Thanks a lot!
Post Reply
16 posts

I've been rather quiet during the pandemic - not a lot of coin to throw at knives, but I'll pick up the odd stamp that's been on my list for years if/when they come across my periphery for the right money - once in a blue moon occurrence since I don't really chase after Latamas or any of the other "not rare, but expensive" stamps.

What I present to you today is a knife I've only found two examples of online - one I believe was an 11 inch that Latham's sold a while back, and the black one on the SharperDeals stamp archive - that one (or one very similar) popped up on eBay a little over a year ago - before disappearing after a matter of minutes when someone presumably emailed the seller with an offer they couldn't refuse (at least that's what I think, since people in the facebook groups were going crazy).

Depending on who you ask, BEDIMA was a couple of very different things. Sharper Deals says: BEDIMA was a factory with two partners: BEltrame & DI Chiara MAniago.

However, Angelo Campolin told me over email that it was a scissor factory in Maniago that dabbled in sporadic picklock production when everyone else was doing it in town in the late 40's or early 50's.

In any case, "products from the BEDIMA factory" are one of the things that the cutlery museum in Maniago specifically boasts as having on display; exactly what product they are referring to, I do not know - promotional videos I've seen of theirs feature no stilettos.

If anyone knows more about this stamp (or has an entirely different origin story altogether!) feel free to chime in. 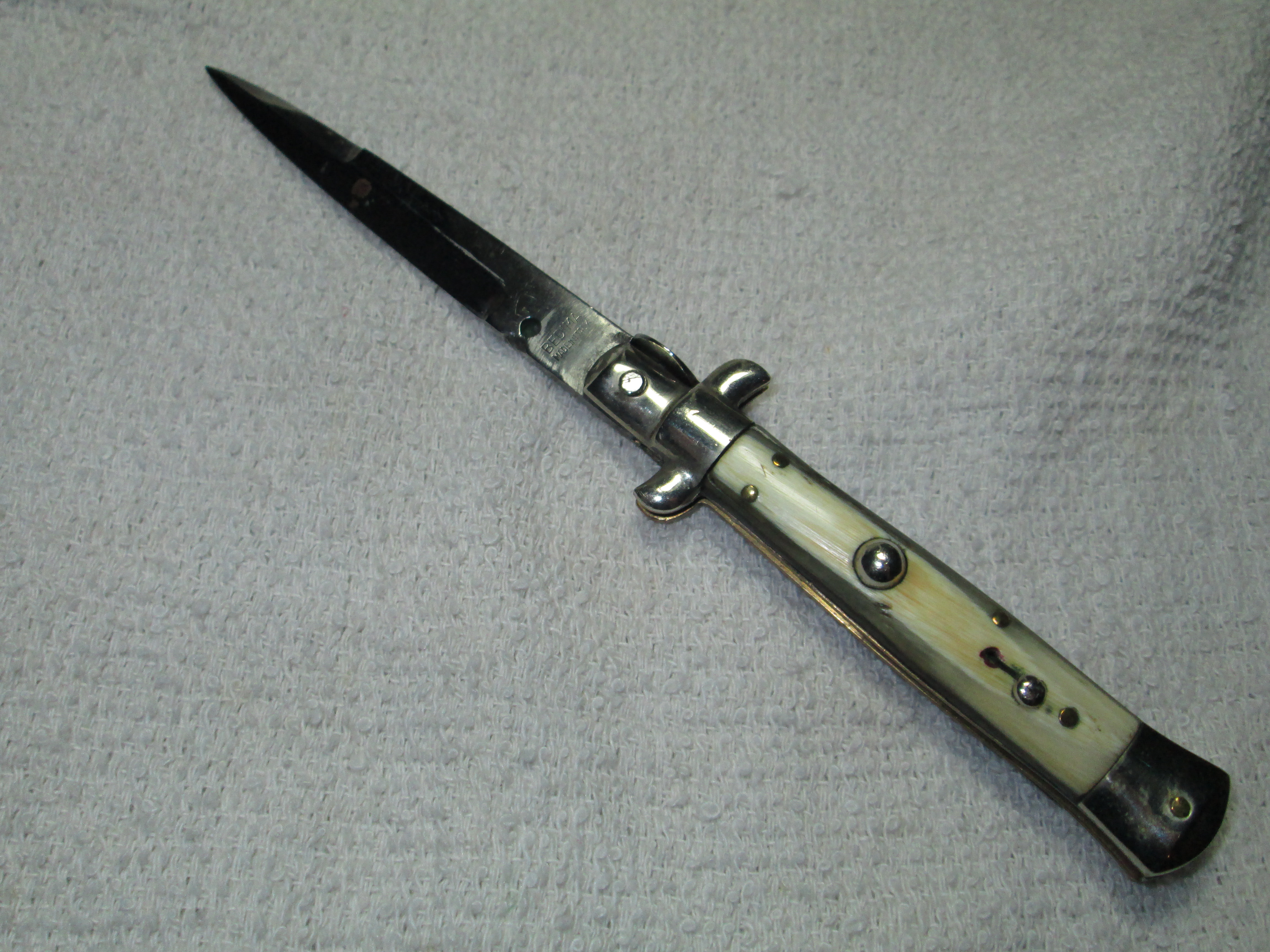 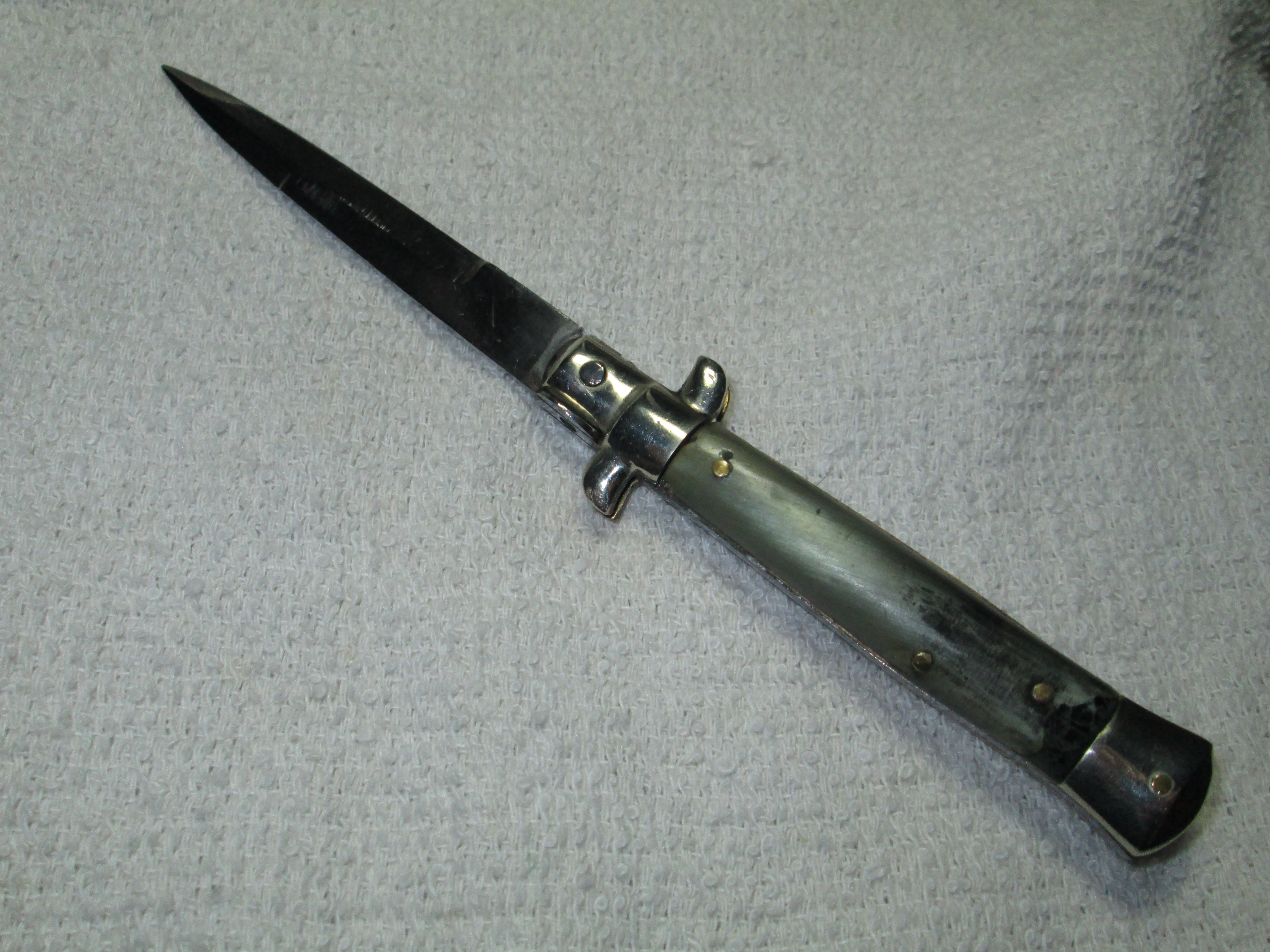 (Sorry, my camera isn't the best, and the lighting in my flat is even worse!!) 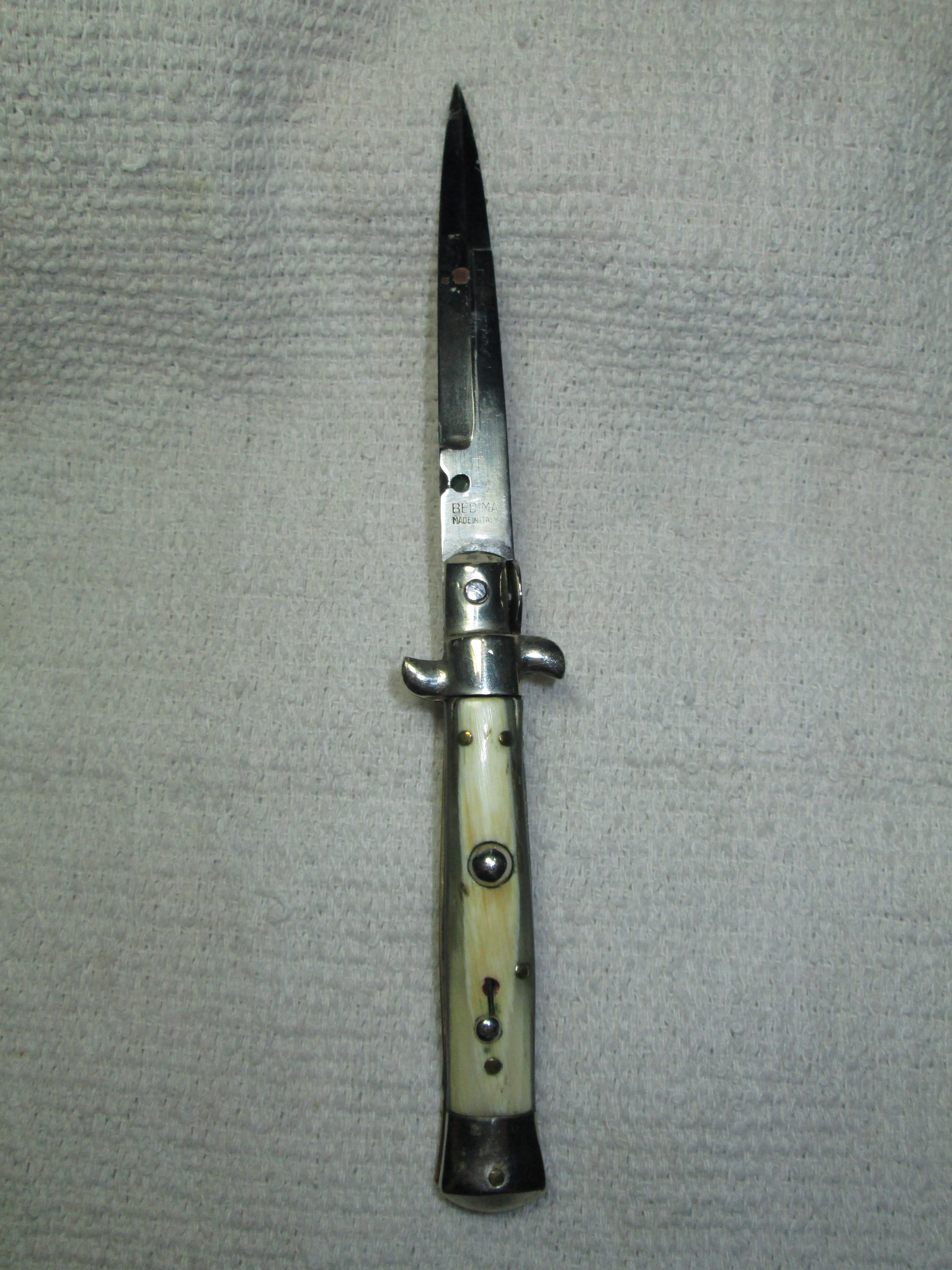 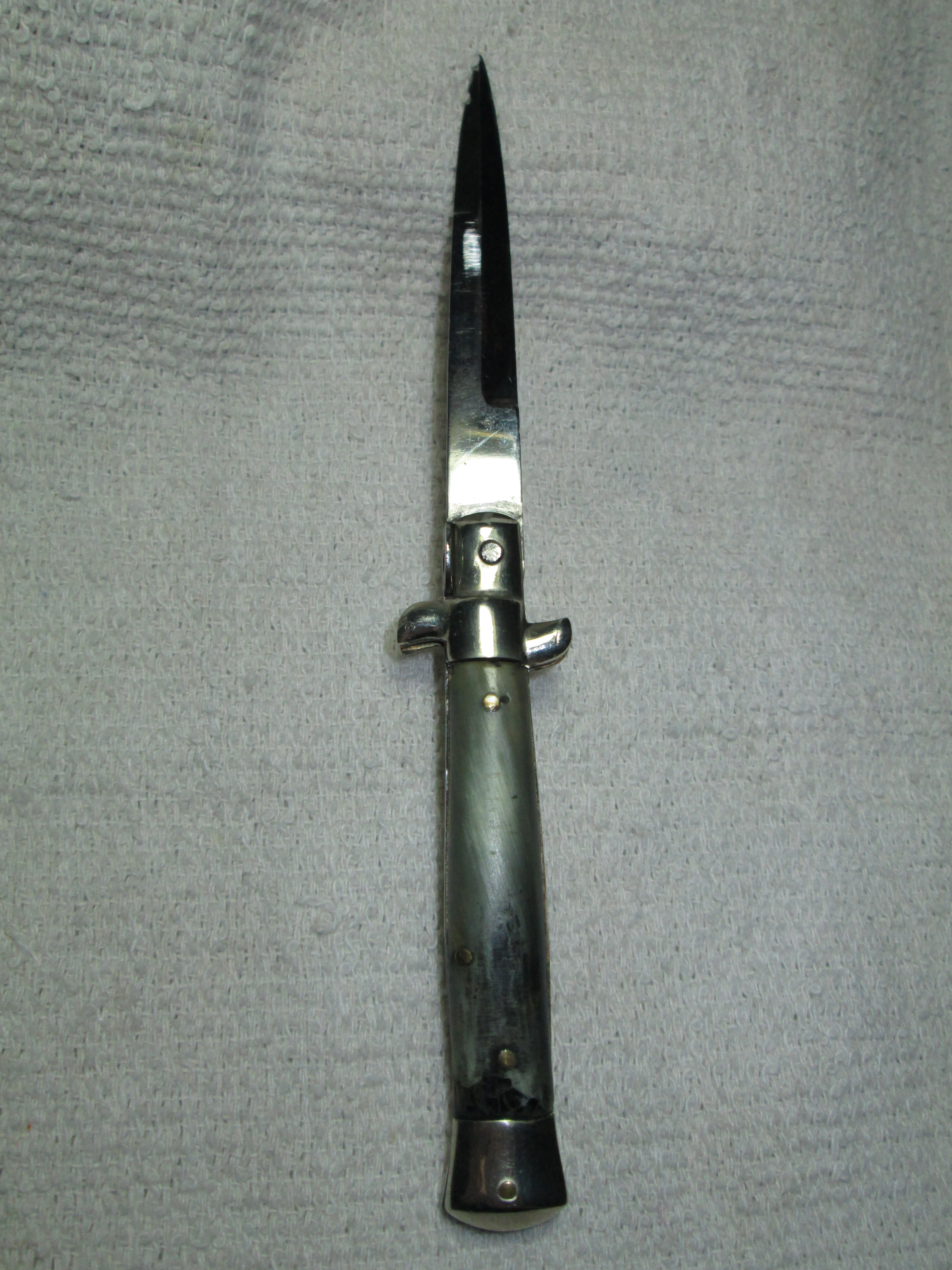 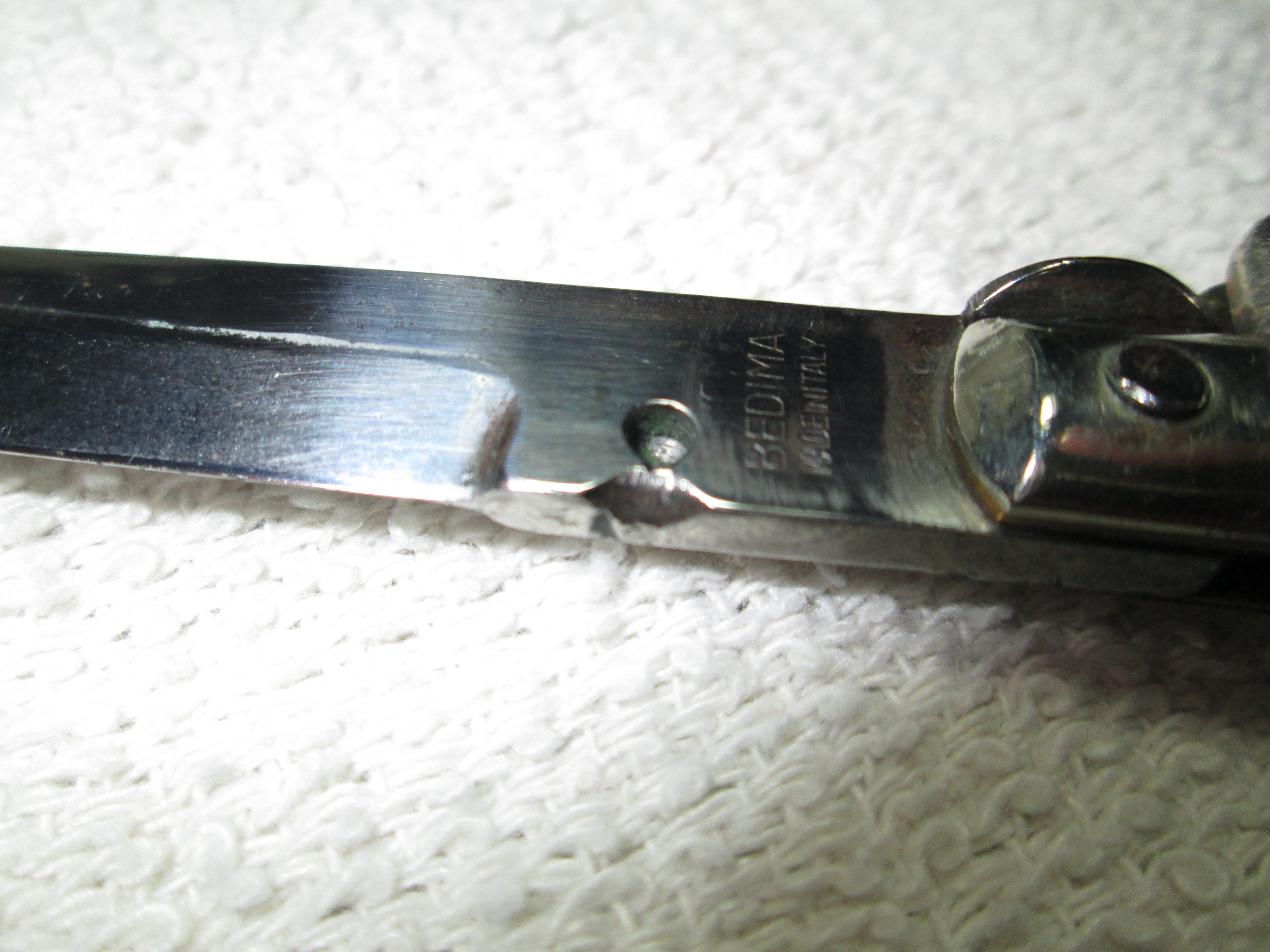 The searhole appears somewhat worn, but with the exception of a searhole-sized rust spot higher up, the blade is pretty minty. 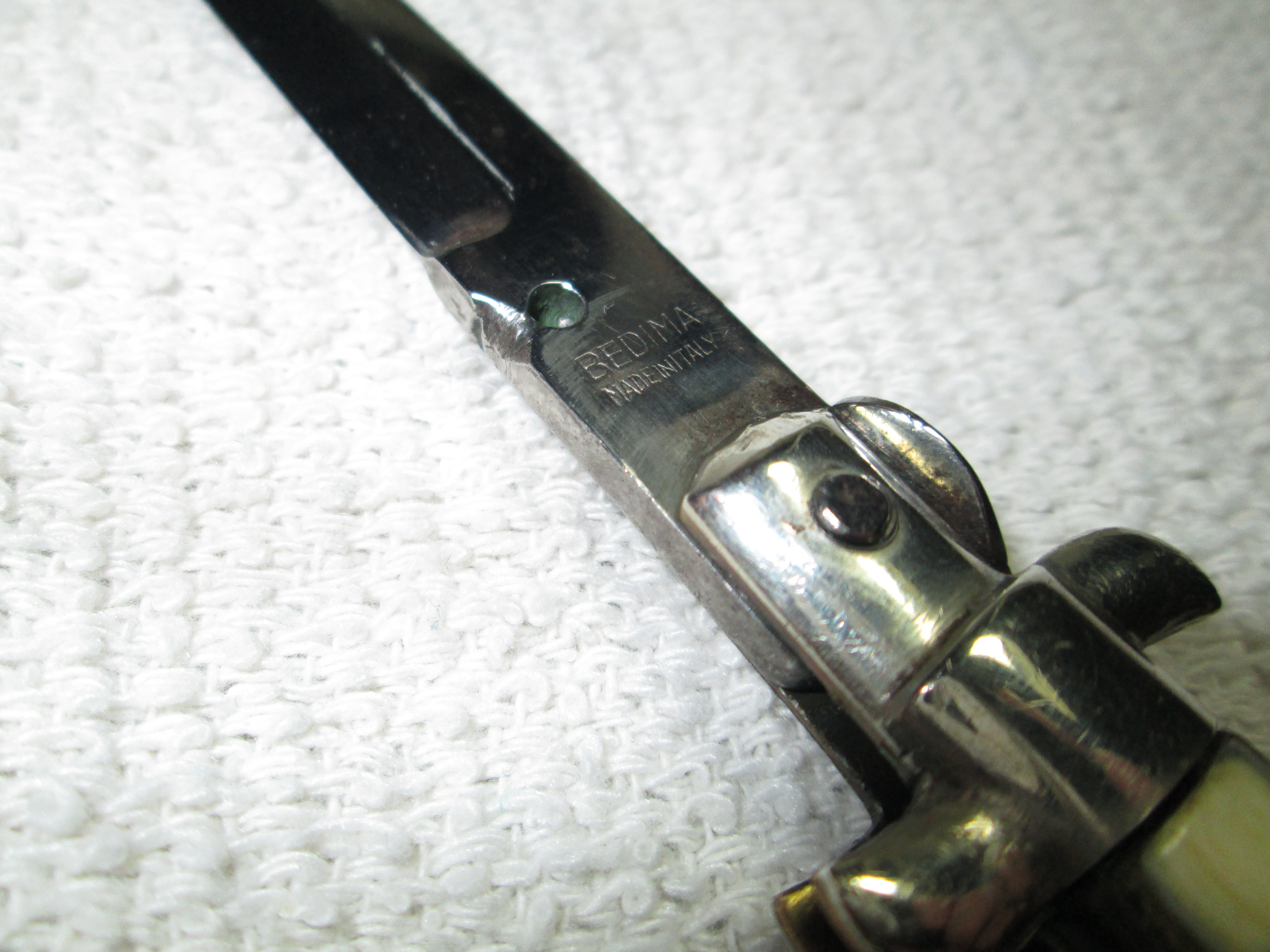 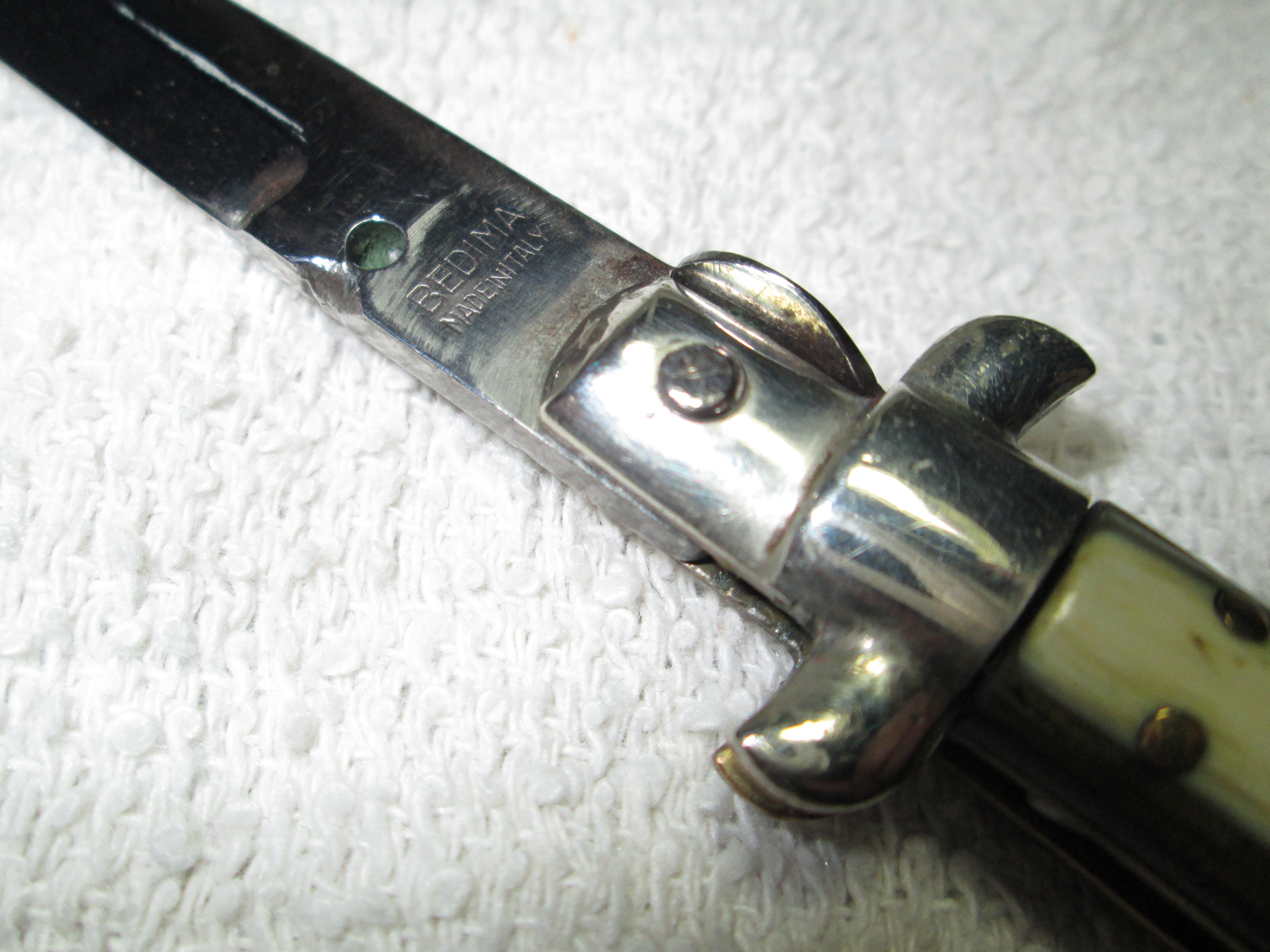 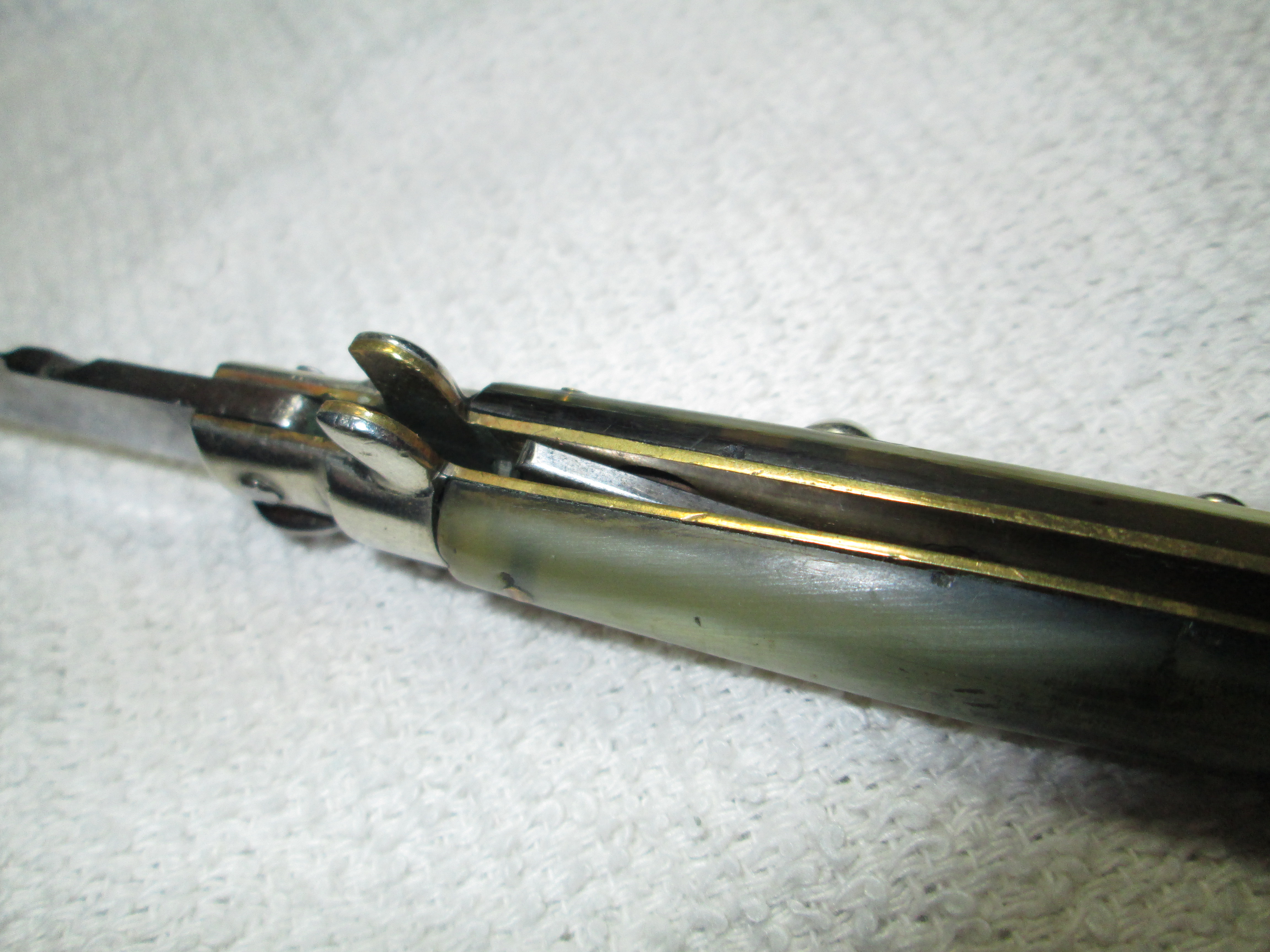 (Trying to capture the D-Stamps) 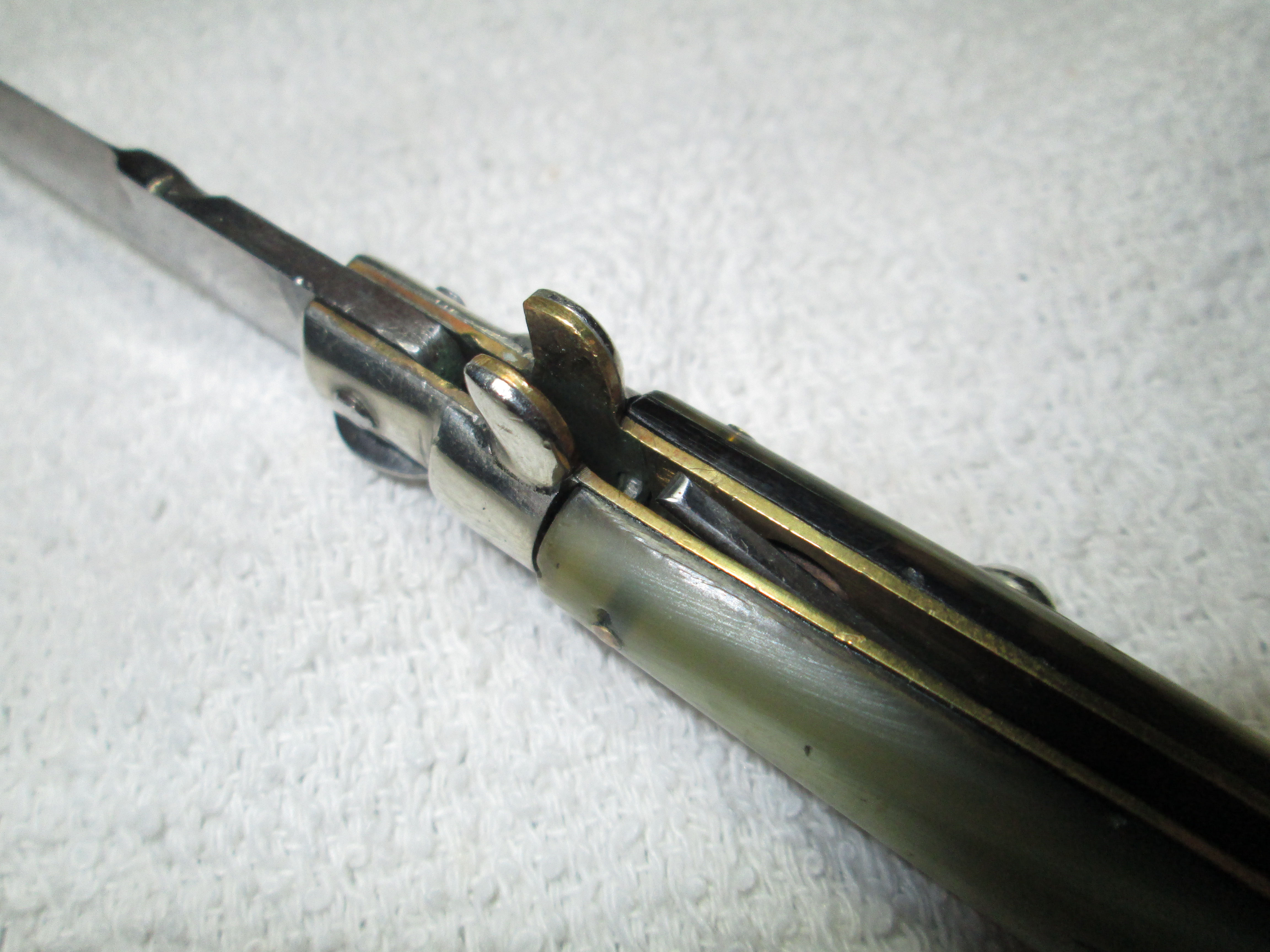 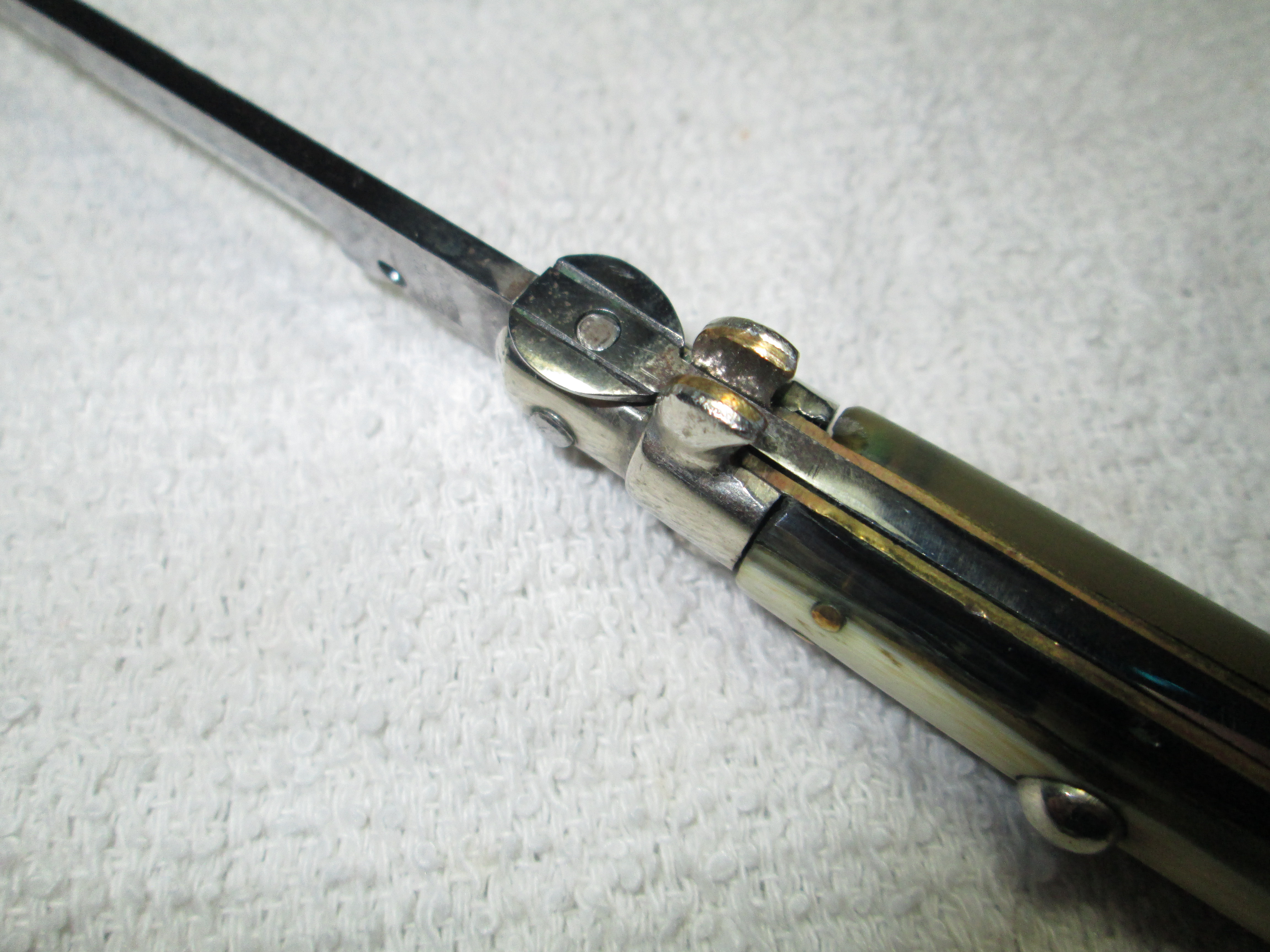 I like the nice round tab. From the nicks on the bolsters, button, and safety, I suspect this was carried, and played with, but (thankfully) never sharpened. 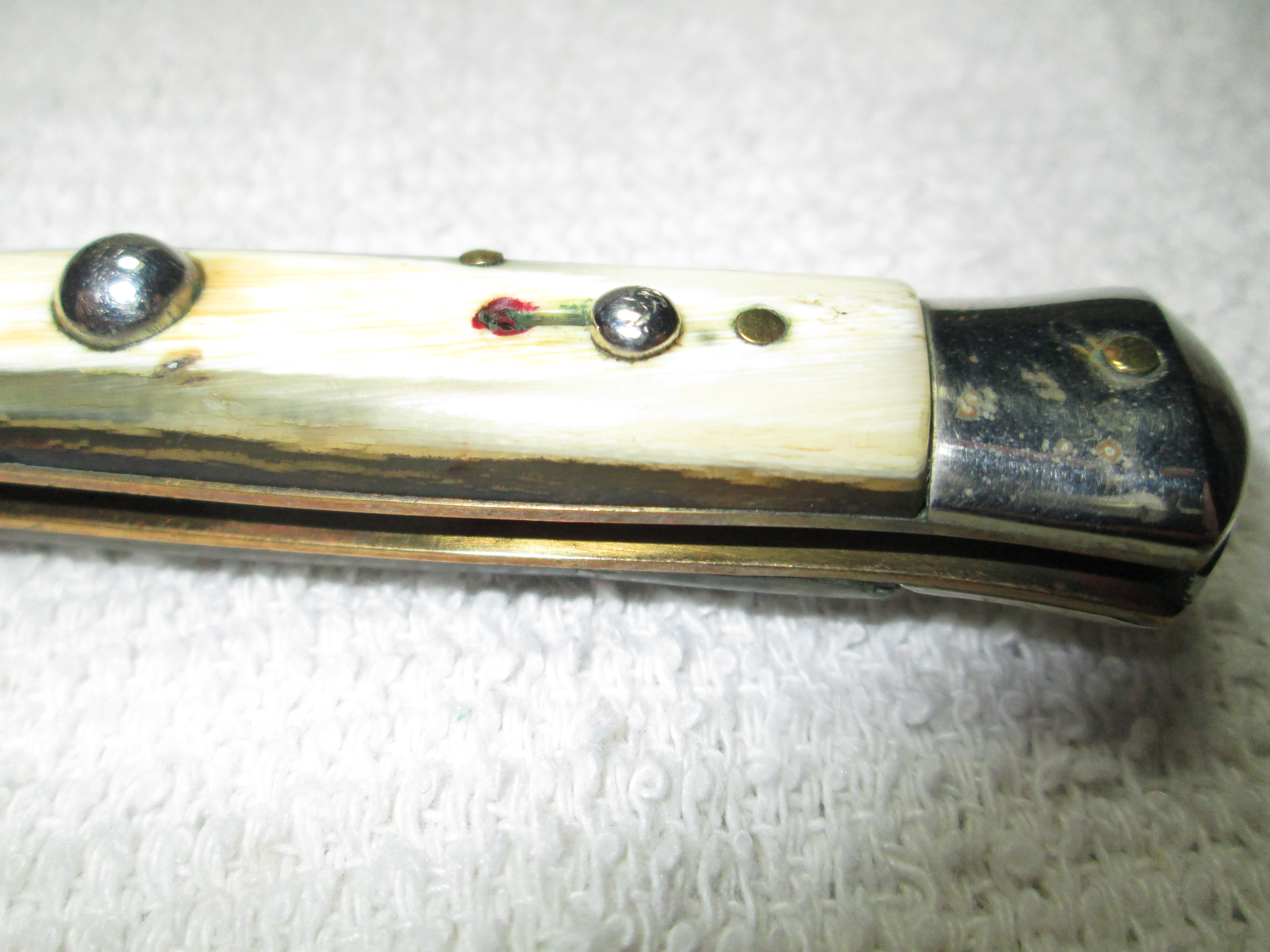 All examples of picklocks stamped BEDIMA that I've seen have red dot safeties. My camera makes it look a hell of a lot more bright than it actually is. 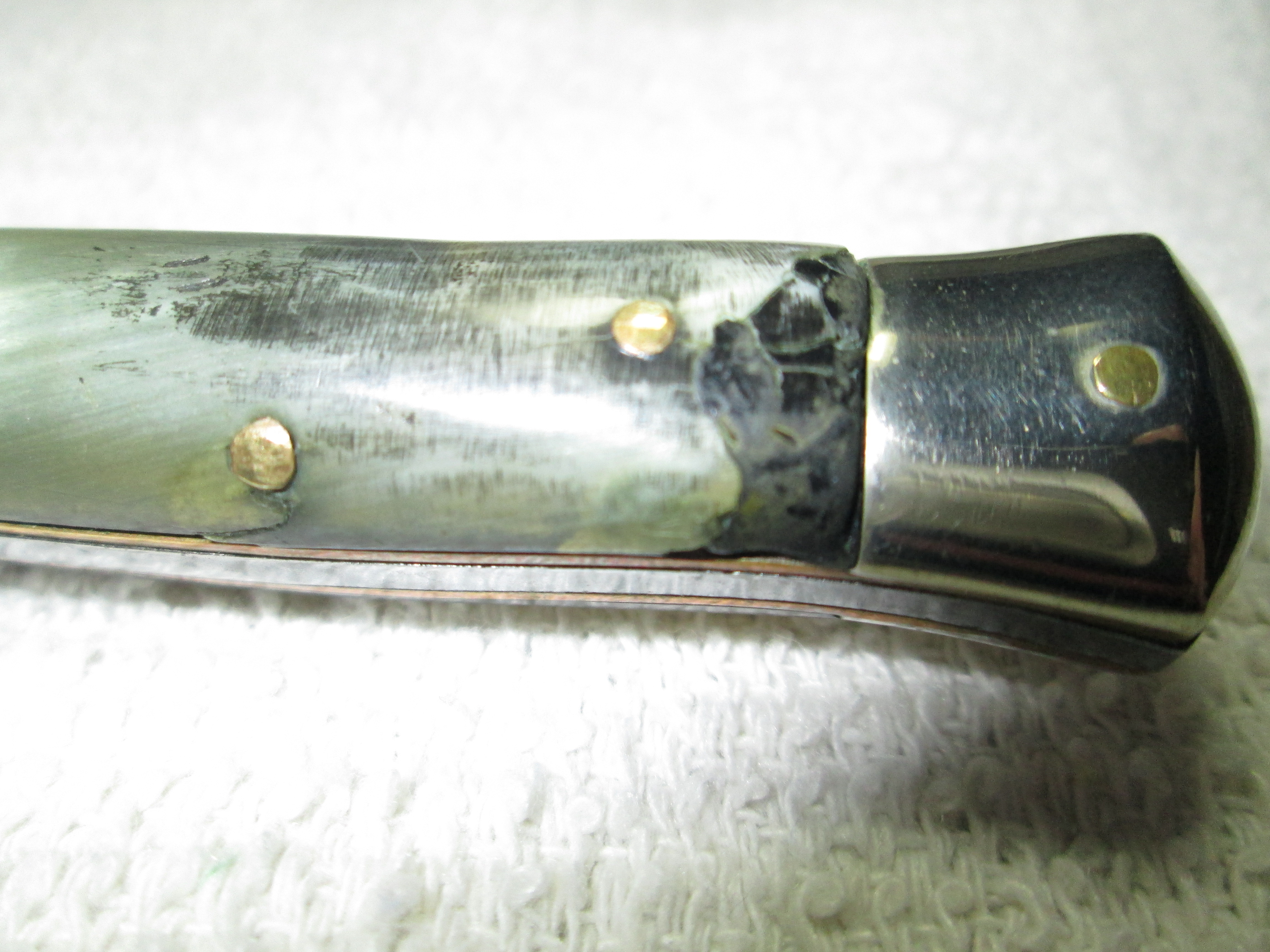 Also appears to have had some scale patchwork done... and it didn't age very gracefully!

Overall, I really like this knife, and as I did with my BV&F finds, I welcome anecdotes and pictures of other examples some folks might have on this forum, especially since info is rather lacking. Thanks for taking a gander at my latest haul.

Luke
Knee-deep in the hoopla...
Top

Congratulations Luke! What an exceptional find! I'm very happy for you!

Nice score on that one!
Top

Thanks for sharing that classic Luke, I like you point about not rare tang stamps, but of course that doesn't exactly pertain to your knife. I have seen the stamp before in photos but don't think I have ever held one, let alone owned one. It is always nice to see a stamp that we don't often see.

Congrats on finding that one. You are a patient man. Why on a lot of vintage knives do the scales have that greenish coloring? Is it age or was there a lot of green horn back then. Rarely do I see it now.
Thanks,
Thom
Top

Luke my friend the wait paid off,what a rear find!,I like that your knife has that look that it was carried,and cool size.
Top

Very nice! I had one years ago but unfortunately don't have any photos that I can find.
Top

Super nice!
Mistakes are like knives. They can help us or they can hurt us. It all depends on whether we grab ‘em by the handle or by the blade.
Top

Thanks for the kind words, everyone!

Small update folks - it appears that Sharper Deals was correct. I was given a picture of this old business card by someone on Facebook today.

Knee-deep in the hoopla...
Top

awesome knife,.. love the look of a completely hand crafted knife. Gonna throw mine in, for good measure. 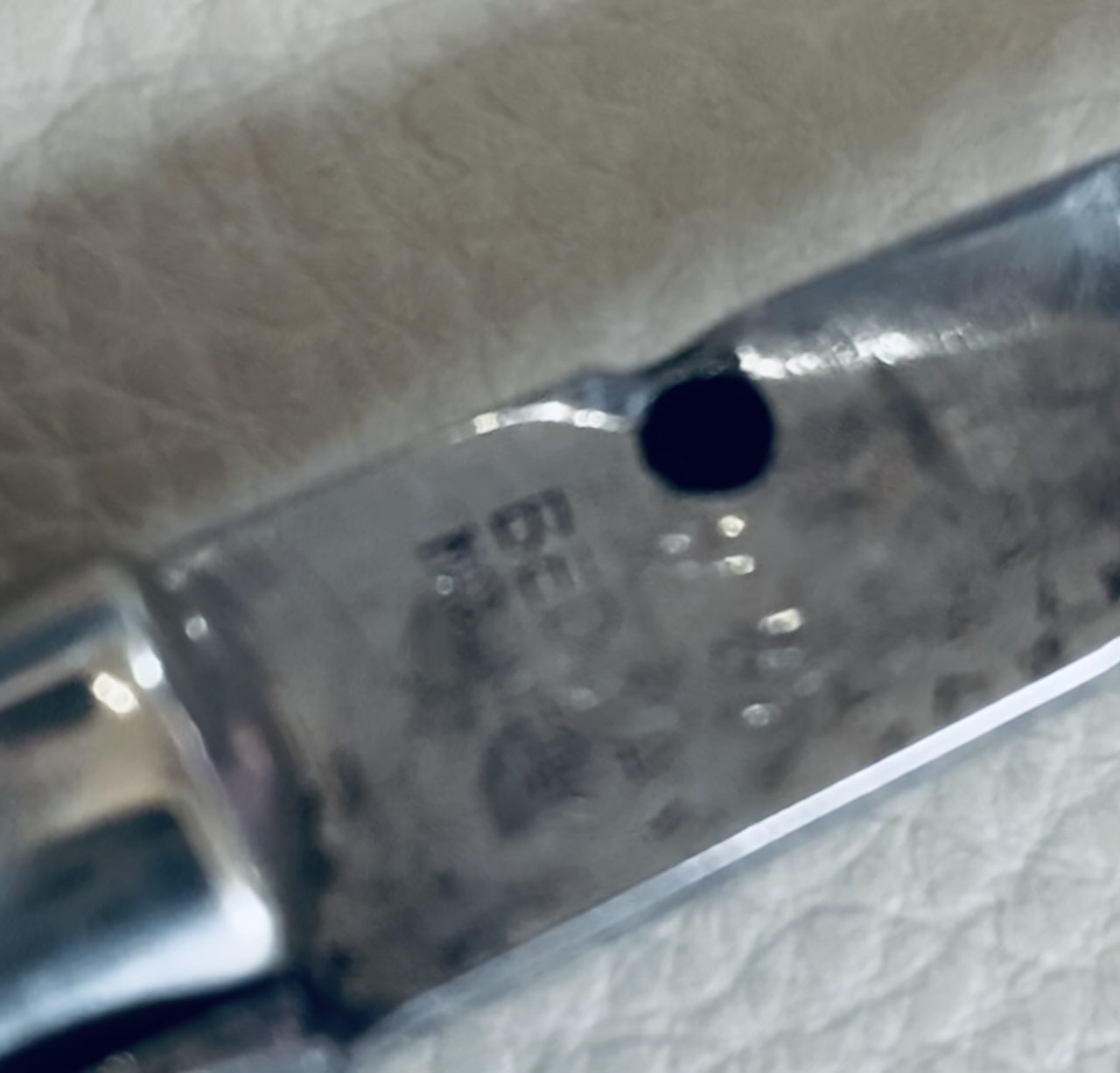