My partner, Duke Charlesworth, and I make up DoubleD knives and we have been especially interested in what might be called Sardinian knives, or Molise Priolettas. This is the style that Lelle Floris and Antonio Contini favor. I want to talk about the latest one, third in a series but apparently I never got around to posting #2; so this will be a somewhat long story. These are not for sale; they are prototypes and out of my personal collection. Of course, if you want one, I'm sure Duke would build you one, or maybe JimBrown257 ...

This was our orginal concept a couple of years ago, a very narrow 14¼" monster with stepped down bolsters. The blade was narrow to start with, but up toward the point there was very little material to fit two surfaces onto. This was the first one Duke built for me, so it holds great sentimental value. I called it Il Punto (that is "il") and meaning, "the point".

Duke requested I never use that stepped bolster approach again, as it requires hogging out a bunch of nickel-silver which tends to load up the cutting tool. The scales are dyed and stabilized giraffe bone from Giraffe Bone.com (Nico Bernard) and Knifemaking.com (Shanda Jantz). 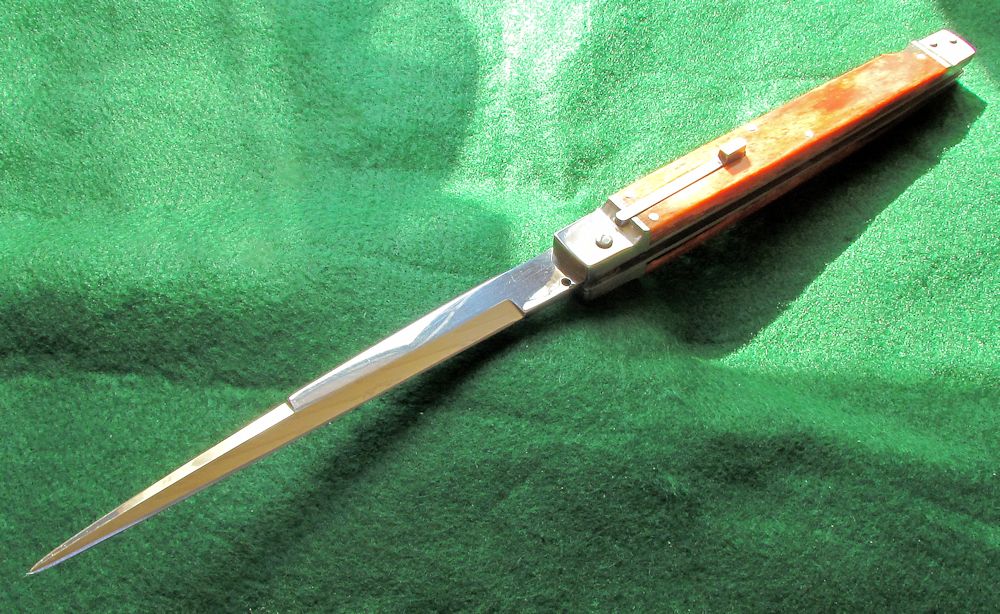 Version 2: This was my concept for a 13 incher in the style of Lelle Floris. You may note that it's not an exact match to the finished knife. You have to let the cutler/artist have a bit of latitude to make it his own. Also, this was about a year in process and Duke and I made adjustments and compromises along the way. The drawings and actual knive never quite came to together as perfectly as I would want for the sake of this post.

Here's the same view of the closed knife.

This is the open view showing internal parts.

This is the closed view showing internal parts.

Here it is, and I believe Duke flipped the logo backwards. Note that we decided to drill the sear hole all the way through; blind holes tend to load up with crud. We ramped the ricasso to facilitate closing. The vertical lines are strictly decorative and evocative of the classic design, as are the pinned on S-shaped guards. 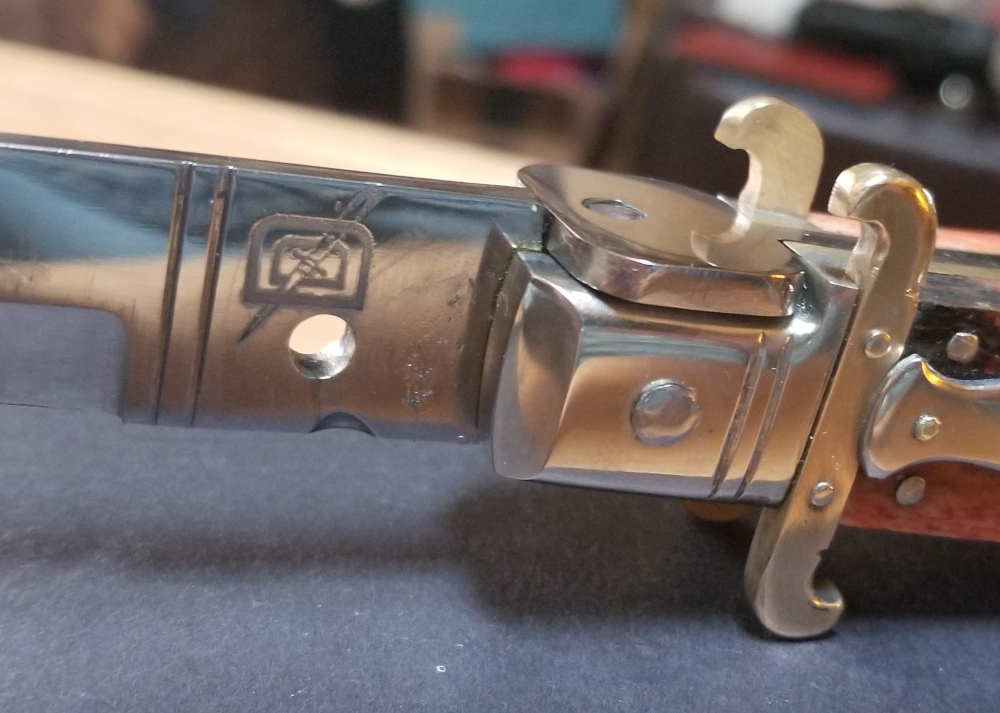 This piece is big and beautiful and has a lot of time-consuming details, like the decorative cut lines and using a mix of brass and nickle-silver for the furniture. The double-dyed giraffe bone scales look really good on this one. It's not as slender as Il Punto, but it still looks great. We called it Dndinian as in "D and D and Sardinian." 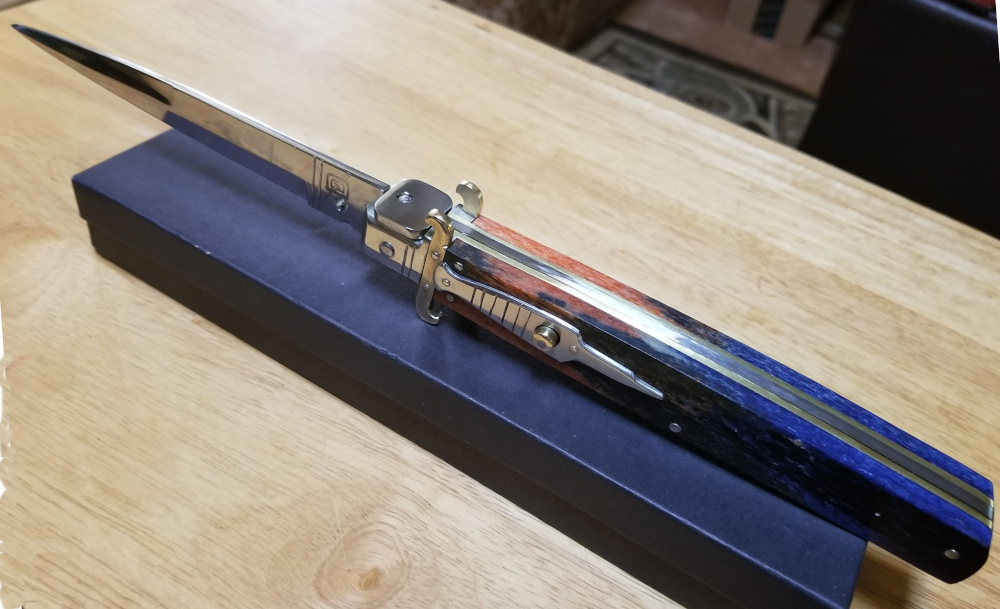 Back side, ain't those scale colors something?

Bladewell. The escutcheon plate is strictly decorative. It's a standard rocker mechanism. 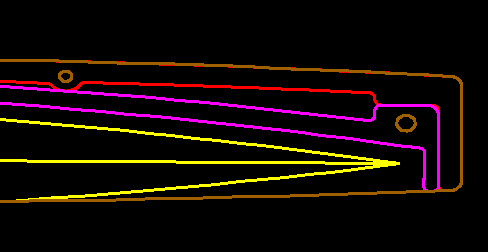 I was worried about leaving enough meat on the end of the backspring to close the knife and drew it with two more pins just to hold the scales on. Duke simplified all of this down to one pin and recognized that the "spacer" didn't need much meat because it is steel and it's not perforated with superfluous holes. One pin of that size is more than adequate to anchor the scales. Pretty clever is he! 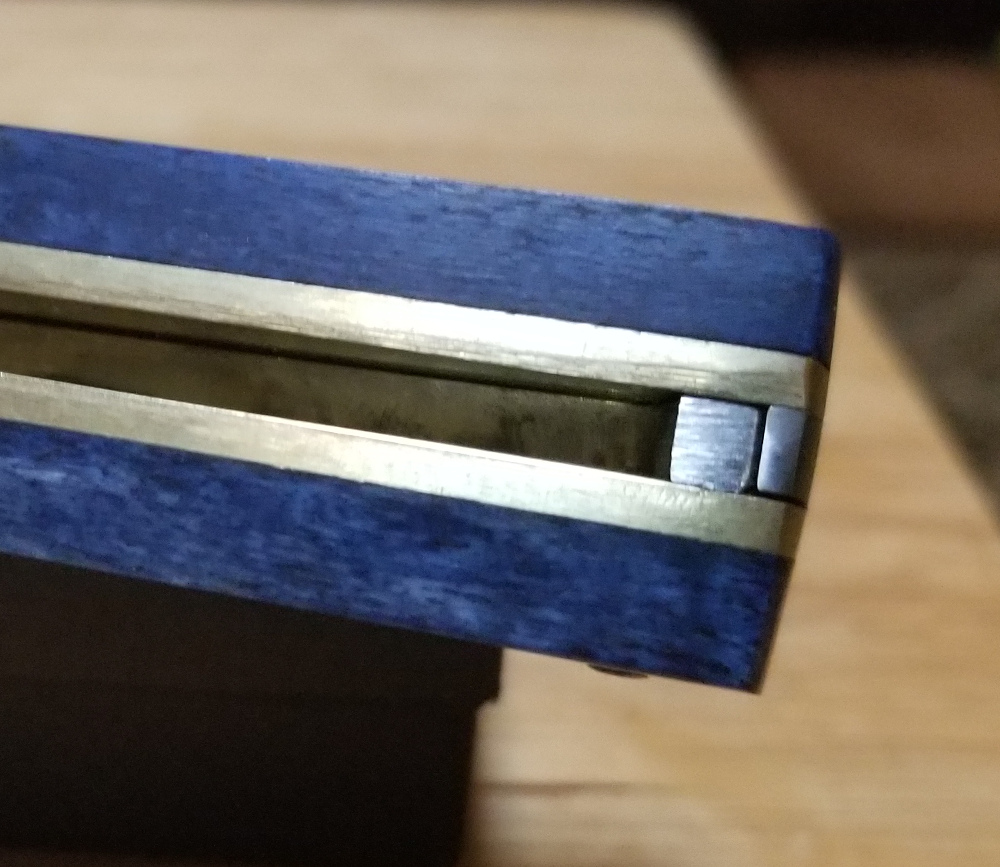 The blade on this one is classic Italian in that it has a "straight" section past the ricasso and then uses a constant radius curve to the point. This is often called a "spear" point. Obviously this one is a bayonet, I am speaking just of the underlying profile.

This is the third generation, Para Punto. It's another 13" but with the easier to grind parabolic blade profile. Antonio Contini made the first ever picklock swinger based on my design, after I bugged him to use the design as drawn and not pin on guards like he usually did. I sent this design to Duke before I sent a similar one to Antonio, but AC makes his living as a cutler so his version appeared first. In defense of Duke, this is his first ever swinger!

Same knife closed view. I conceived this with a somewhat rounded profile, but Duke opted for slabs. I can certainly appreciate that he wanted to get this one off the bench and off his mind!

Now this is how the logo is supposed to look. I am the small D behind the knife as designer, Duke is the big D in front since he is the builder. 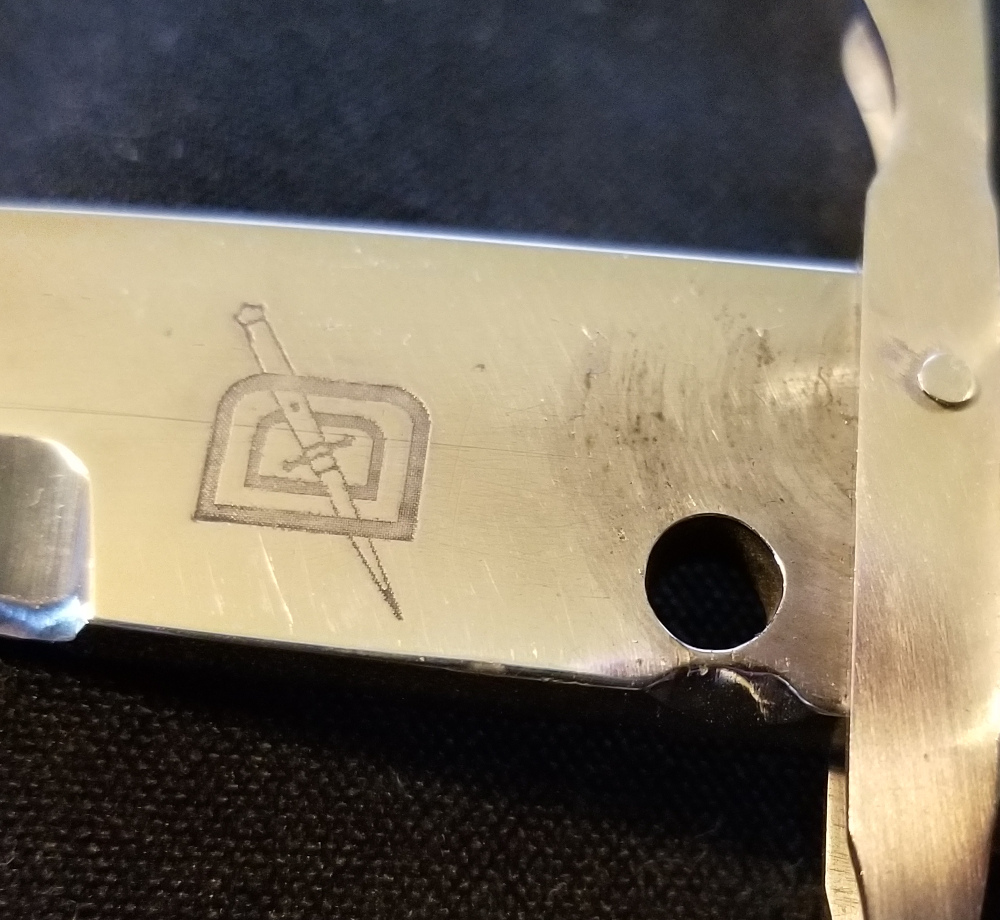 I think it came out great. All parabolas can be superimposed by scaling, that is, they all have the same shape. In the case of a knife I start the parabola at the point and scale it vertically to match the width of the ricasso. This means that the curve starts at the ricasso with a very large radius (nearly straight horizontal, very little curve) and the radius changes continuously as you move toward the point, where the radius is infinitessimal (very curved, approaching straight vertical.) This means that most of the change in vertical height is at the point, so it's not so narrow as other approaches and easier to grind. I am at a loss to explain why, but for some reason this generates more room for the midpin. This is always a critical point in knife design. I typically use 3/32" for through pins (5/32" blade pivot), but at the midpoint/lockback hinge I use 1/16". Ideally I would leave 1/16" space around the pin so the pin won't tear out under stress and I am not so close to the edge that the scales will crack. Now I still need another 3/16" of clearance to the sharpened edge of the blade at the most extreme rotation to close because that's where the kickspring goes. Somehow, this seems to work out better with parabolic blades, even Kris blades with an underlying parabolic profile. 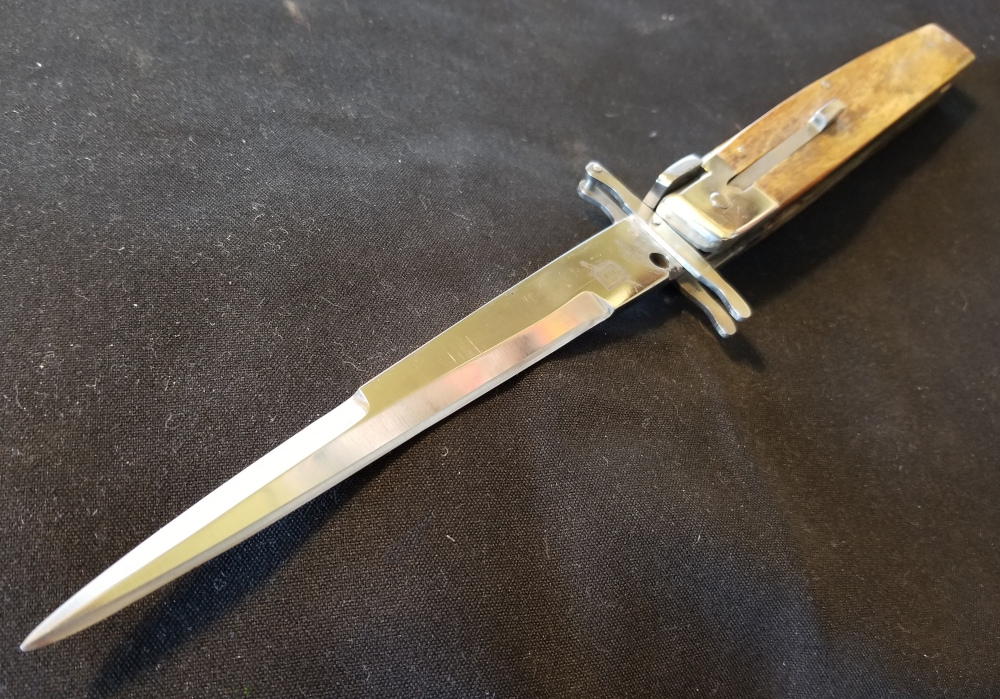 I wasn't content just do to a Prioletta. I created a swingguard, oh, and let's collapse the swings into the handle. Also, double pin the swings so that they don't "scissor". I would have prefered a one-piece version, but I was already making Duke pull his hair out. You can still see the guards, but you have to look really closely. 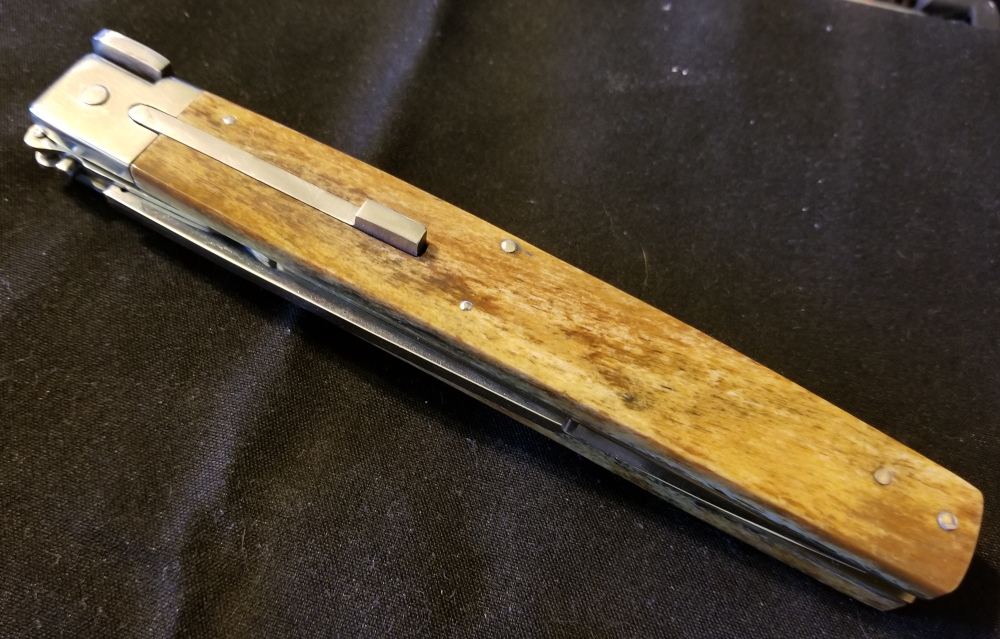 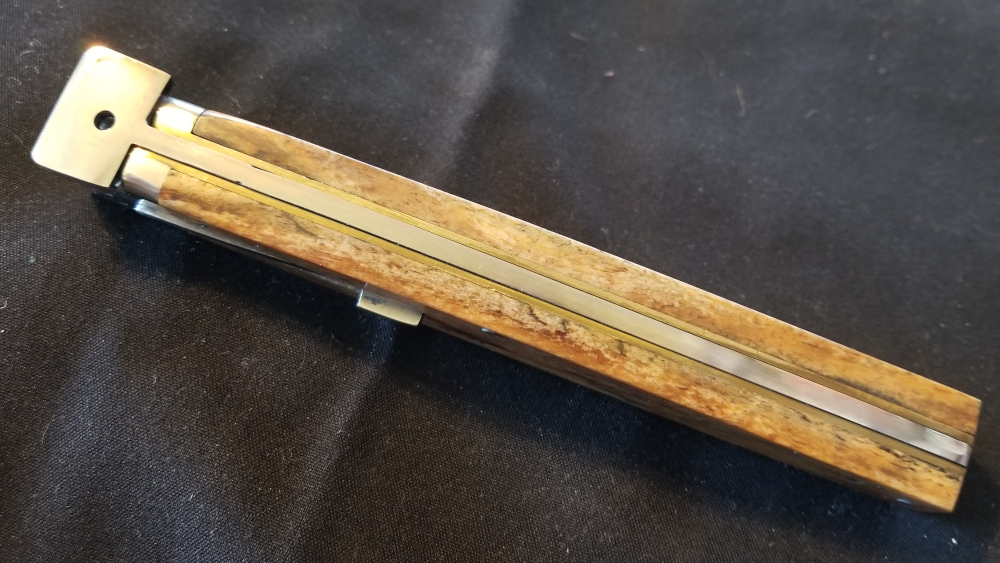 I don't know why, but the back scale always seems to be just a little prettier than the front, even when I pick the backs and fronts and which end goes toward the pommel. 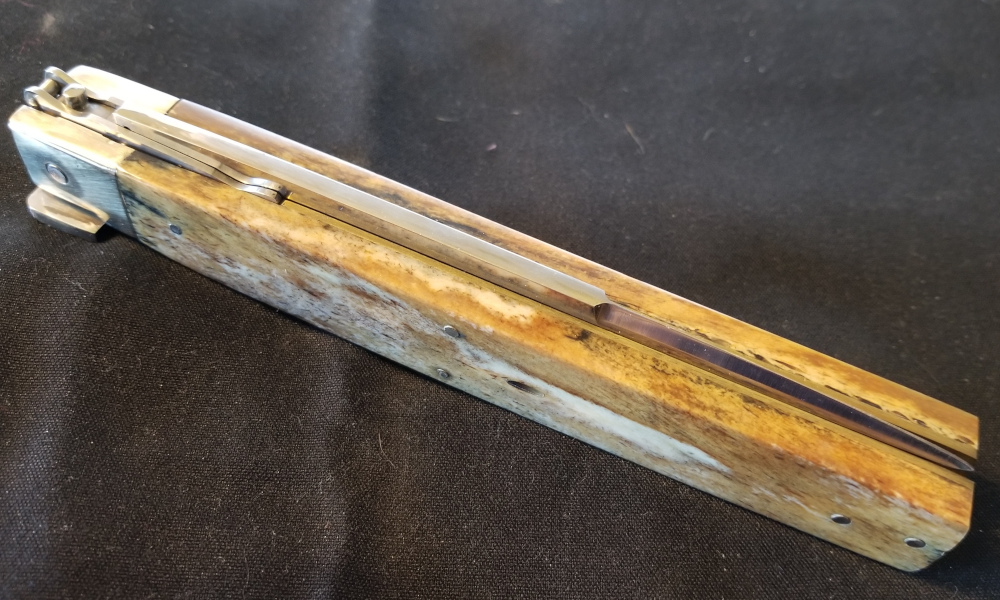 Clean design, master execution. I am much better at design than I was when I did Il Punto and Duke is getting more comfortable. He has mad skills from building fixed blades all those years, but switchblades are a new thing for him, too. You can teach an old dog (dogs in our case) new tricks, but damn, they're slow learners and the die on you before the class is over! 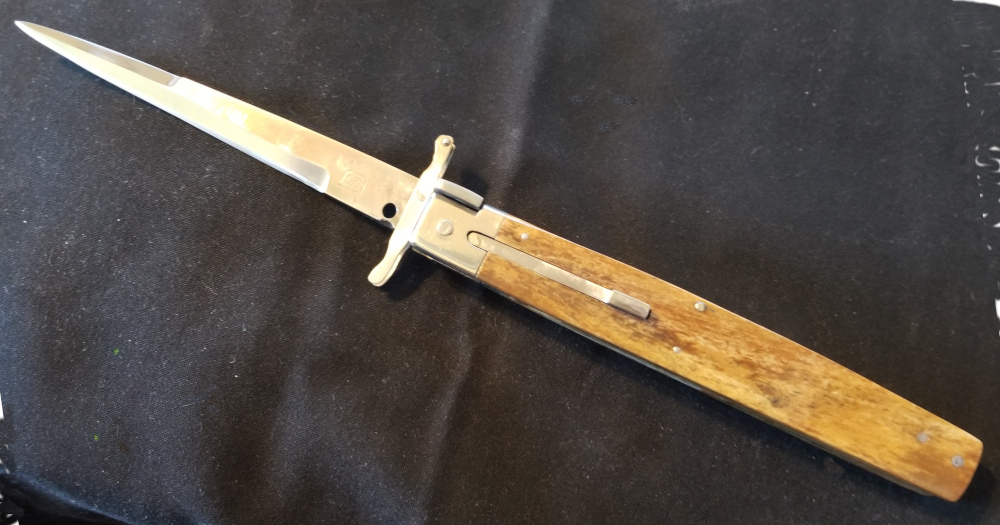 Those are really nice and I see why they aren't for sale. Keep them coming Dave!
Top

To tell the truth, Sam, I rarely post on the forums any more since my posts tend to be ignored. (21 views and 2 comments) If it isn't a Latama or Coricama, it don't count. I put most of my posting effort on my FB group, Artistic Switchblade Knives. There are 1400+ followers and you see a lot of cool stuff.
Dave Sause
oldandfat@cox.net
(405) 694-3690

PS- Love Dukes blade stamp. Does he do that with a laser or ECM? Or is it just etched and looks recessed?
Top

Whipper, it's etched. I designed it in CAD, Duke had a contact. Seems like $50 for 20 copies, each good for dozens of etches.

"By accepting you as you are, I do not necessarily abandon all hope of your improving"- My Wife (1963-Present)
Top
Post Reply
8 posts • Page 1 of 1