A few days back I spoke about creating a Kris blade profile by superimposing a sine wave onto a symmetric blade and the possibilities of creating infinite variations based on the wavelength and amplitude of the sine wave. That is probably too technical for most folks to visualize, so here are some examples. Look at the individual pictures for comments and explanations. Which do you like best? You willl probably flip back and forth between views to make up your mind. All of these were drawn based on a standard 6" long X .625" wide blade with .625" at the ricasso. All of these start with an amplitude of 1/16" at the ricasso (1/8" between the top of the peak and the bottom of the valley) and with decreasing amplitude as you move toward the point. Every Italian Kris I have seen starts with a valley on the spine at the point, and ends with a valley straddling the vertical end of the main grind. For any given valley or peak, the portion of the sine wave you see is EXACTLY the same at top, center, and bottom edge, regardless of blade shape. When I copy it in CAD, it rotates as necessary and adjusts the wavelength to fit the beginning and end points along the edge of the blade. As I have said before, a tiny dimensional difference is barely detectable by meauring devices, but immediately picked up by the naked eye and perceived as good or bad, ugly or beautiful. It's only because I am working in five digit accuracy in my CAD that I can keep these straight. What appeals to your taste?

Figure 1: These are the blade shapes I started with. The typical dagger or bayonet is constant radius with a portion of the edge curved and a portion straight. The parabolic is a constantly changing radius, large at the ricasso (gentle curve) and small at the point (sharp curve). This keeps the blade from getting too narrow at the point. Once we impose the Kris, they look nearly identical. The toothpick is the most radical and is very narrow at the point. 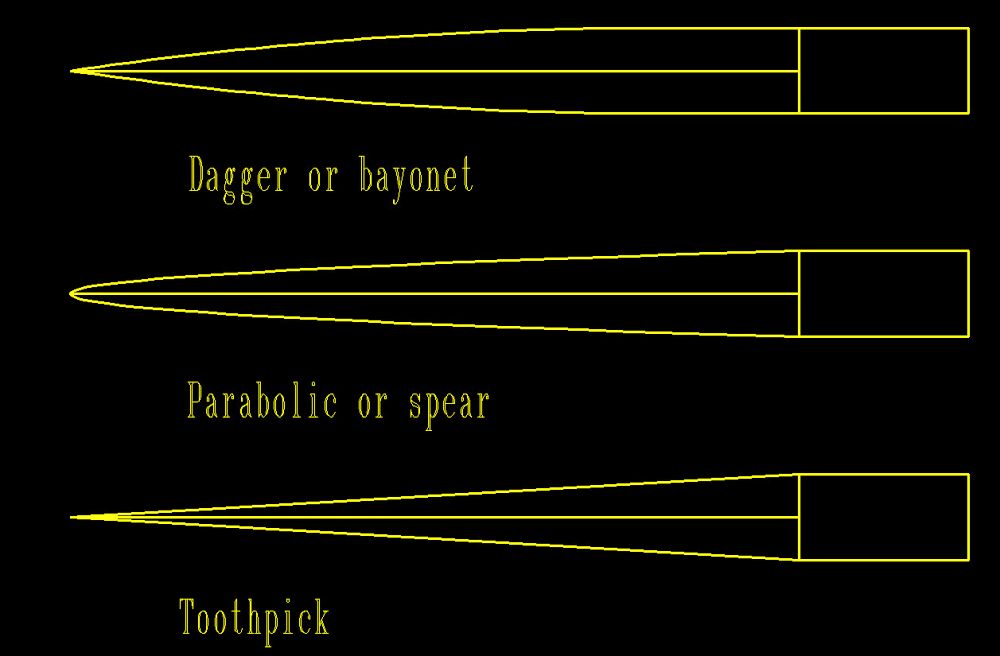 Figure 2: This is what I mean when I say that the sine waves (in purple) are superimposed on the regular blade profile. Figure 3: The top blade is what you see on most Italian Kris blades regardless of length. On the top edge there are 5 valleys and 4 humps. The waves are all of equal length (edge length divided by 4-1/4) and amplitude getting smaller toward the point. Note, it's easy to convceive and draw the toothpick, but it would be a bitch to grind and the point would be very weak. 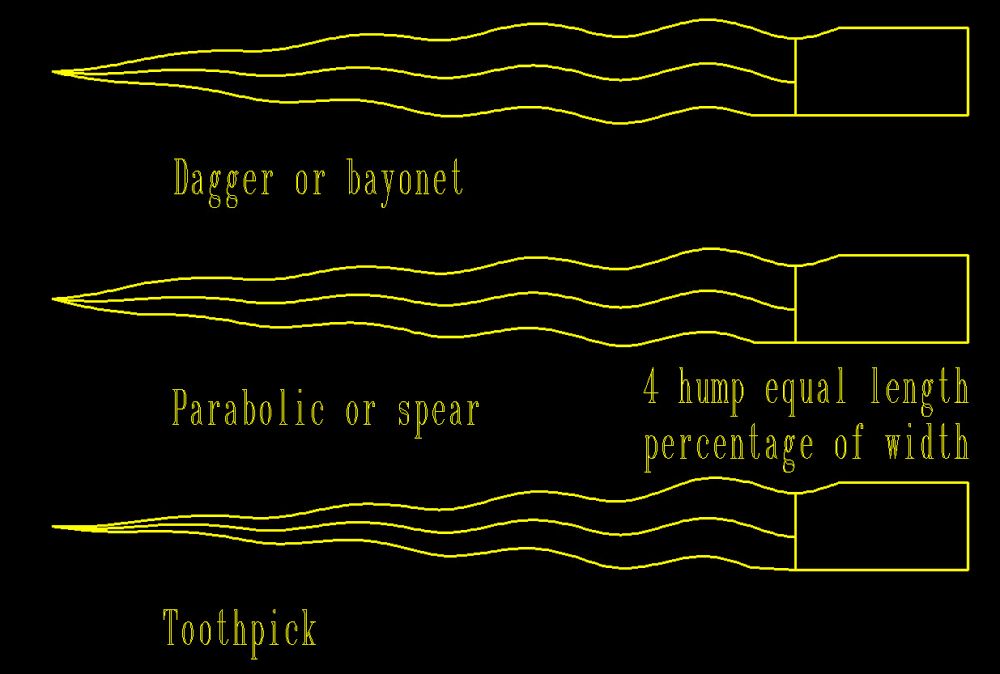 Figure 4: Same as figure 3, but one more sine wave. 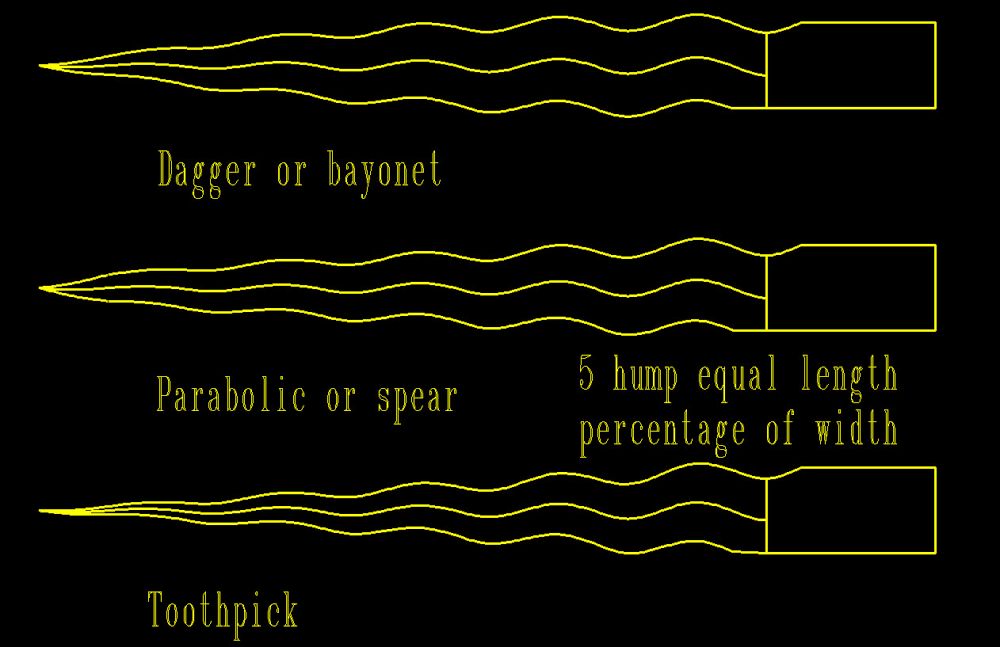 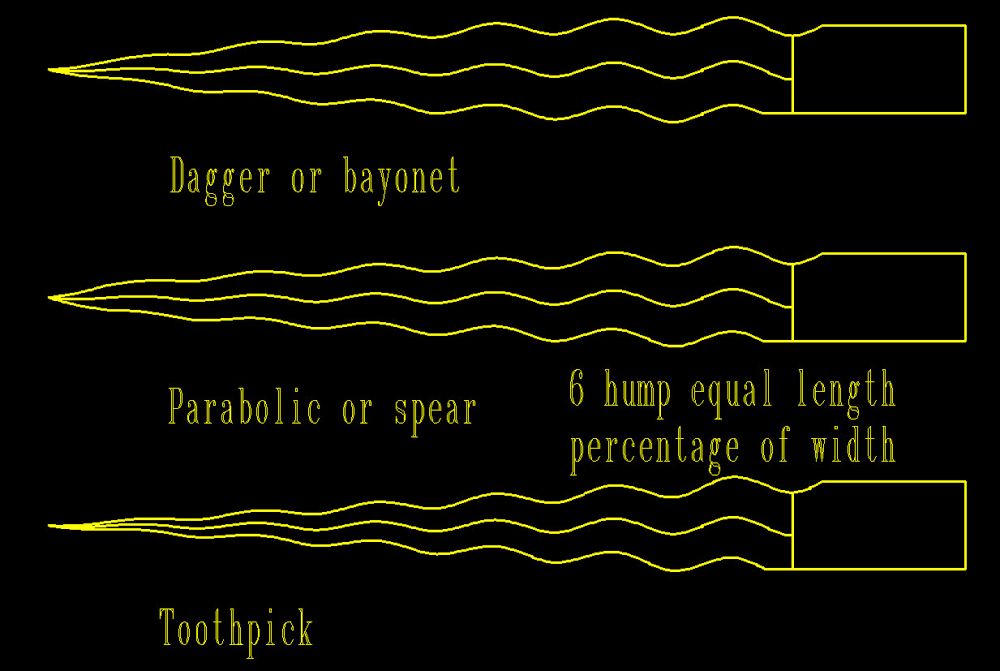 Figure 6: Similar to Figure 3, except now the sine waves are longer at the ricasso and shorter at the point. I think this also improves the looks. 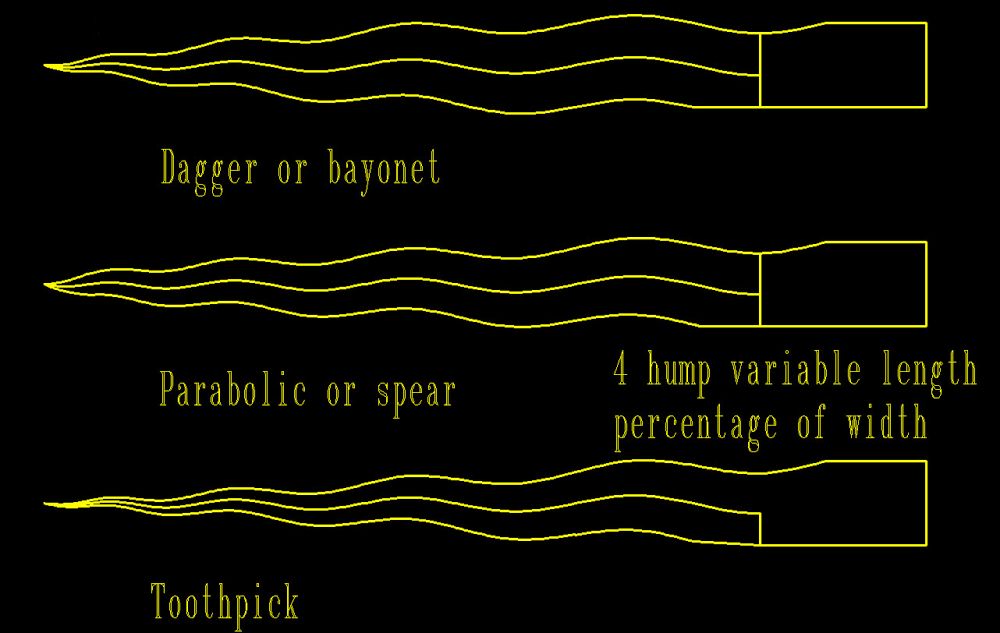 Figure 7: Again variable wavelength and more humps. By the time I got around to drawing this figure I had discoverd a way of making the changes in proportion more gradual, so it looks very smooth, though no two valleys, peaks or combinations thereof has the same amplitude or wavelength. 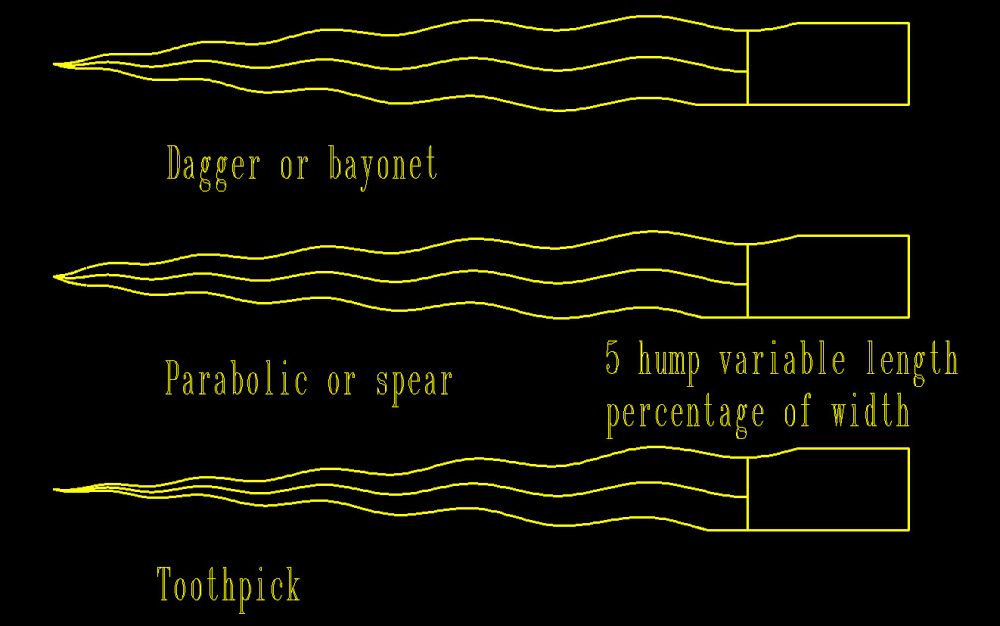 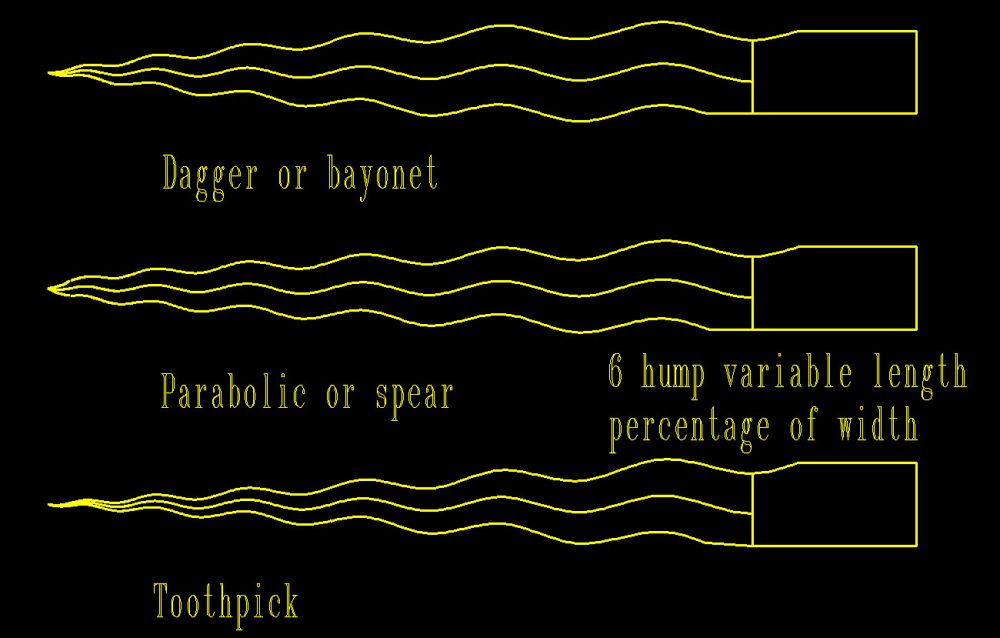 Finally, for your interest and edification, here's a 6 hump Kris that I had built from my designs. The cutler created the blade from Damascus under the crudest possible conditions you can imagine. The rest of the knife has some issues, but that blade is certainly wicked. I think it' equal wavelengths on a standard dagger blade. 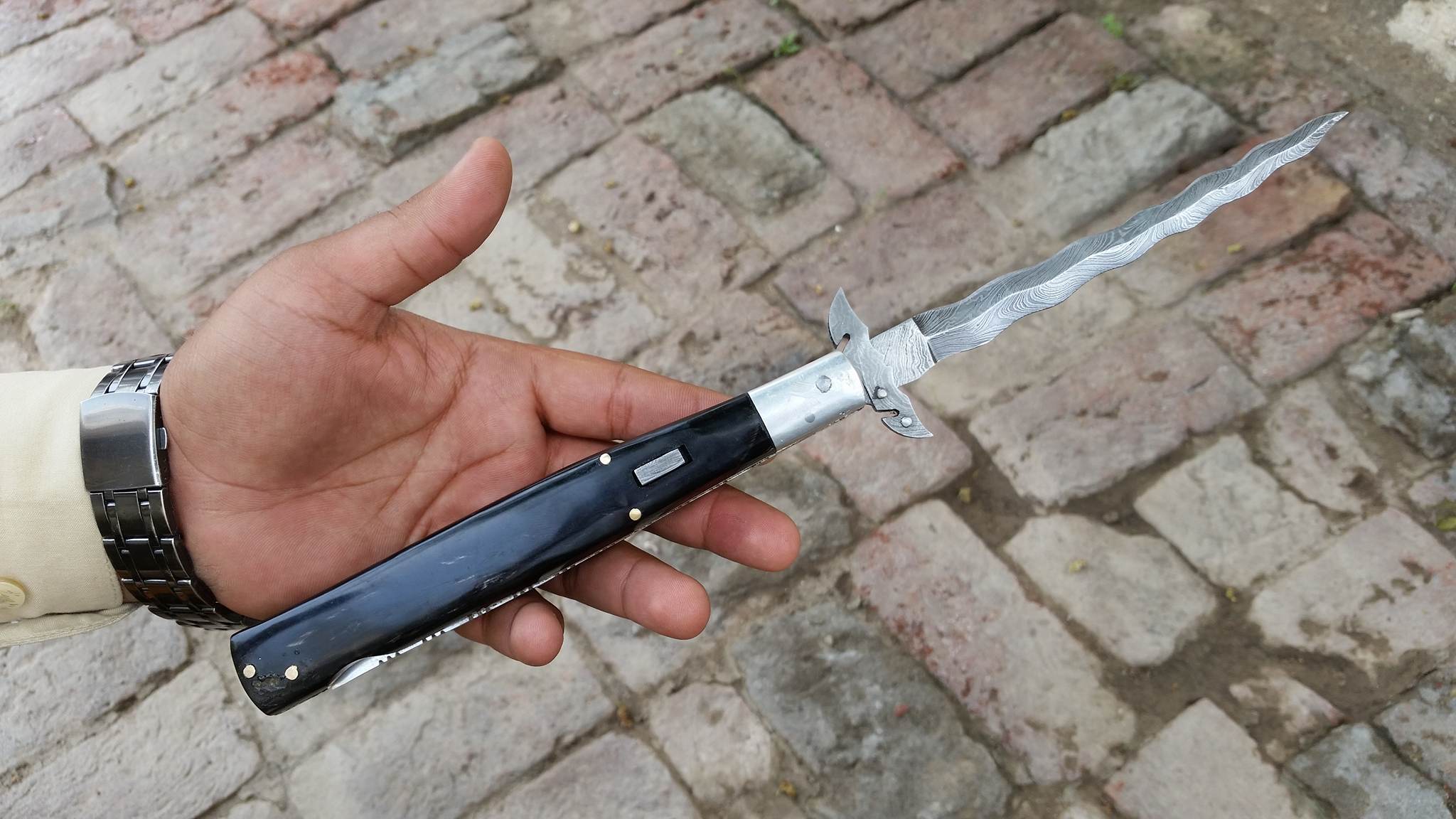 These are just a few of the possibilities. You could vary lengths and amplitudes by a fibonacci sequence instead of lineraly like I did. You might start with a hump and/or end with one. It could have less or more humps, and, of course, it's different for every shape, length and width of blade. Mostly I wanted to show you how I create this and to make you aware that most of the ones you see follow a particular and rather arbitrary pattern. I know somebody patented this, but the idea had already been around for a long time and with multiple variations.
Dave Sause
oldandfat@cox.net
(405) 694-3690

the top shows what I mean by taper to the ricasso on a straight blade. the curve starts at the false edge.
I understand what you mean by the kickspring contact point. I think that's a subtle difference. but you're correct.

the bottom view shows what I think are my two "pet peeves" or complaints I've always had about "Kriss" blades.

1. the top edge of the ricasso should ALWAYS have a longer "flat". . . otherwise the blade looks "upside-down" to me.
I HATE that the old knives always try to make the top sharp edge longer the the bottom cutting side.

Here's what I came up with. When you were describing the shape of the Rizzuto blade and the proportions you were working from the four hump, but when you were talking about not exceeding the bar stock size or the baseline grind you used a 6 hump.

So, this one is a a six hump variable in ratio 100, 200, 300, 400, 500, 600 and the last hump on the top is truncated so as to create a longer ricasso edge. I kept the ricasso at straight 90° and the figure shows both edges of the ricasso, and a bit more where the complete blade length might be. I used the 1° taper starting at the ricasso and extending slightly past the 400/500 line (scaled proportionally to your sketch) and then did parabolic.

The constraint of not having any humps beyond the baseline edge of the blade so as to not screw up the kicker meant we must grind away more of the blade, the centerline is not affected, so we also have to stay within blade edges on the top as well. I made everything flow smoothly. I was able to do it without grind changes other than the last half wave of the center grind. What do you think?

You know how it is with engineers; we can never quit messing with things.

I thought about what Jeremy had said via email and what Jerry said here, and decided that I really needed a smoothed 5 hump version, a bit narrower (9/16" instead of 5/8"). I also changed the proportions a bit to 175, 287.5, 400, 512.5 and 625. I wanted more of a noticeable change in wavelength but to not make the first one at the point so short. I cut back on the amplitudes a bit, going from .01" to .05" so that the curves were more gentle. I thought I might as well turn it into a completed design, again following Jerry's lead. So here you have a 13" nominal by 9/16" Rizzuto, a swinger and lockback with bail and a JK Kris blade. I often hear guys ask for a particular scale color. Sunce this one is a complete custom, you can scale it any way you like. I'm sure JimBrown257 can build it for you. 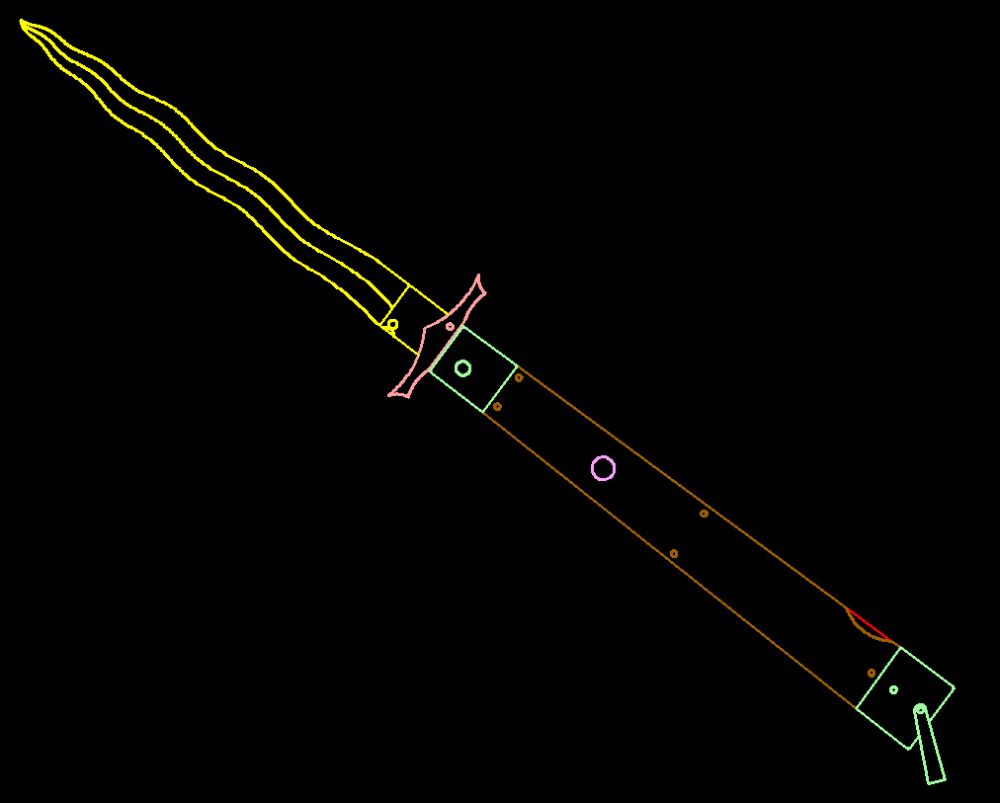 Here's the open outside view:

Here's the closed outside view: (Note I have faked in a fire botton, there's plenty of room so it could be a flat button, or exposed rocker, or anything else you like.) This one is intended to imitate the plainness of the old Rizzy's but with modern materials and design techniques. The guards collapse part way into the handle when closed. I used the square shouldered two piece kicker which allows replacement of the kicker by removing one pin. The lockback shape is fast, only needs about 1/16" to open, but it should hold tight without inducing friction. The angled end at the pommel won't let it rise. The big hump insures plenty of pressure to make it seat.

Here's the internals that I referred to:

Here's the open view with intennals. The dotten line indicates a part of the liner that needs to be cut away so that the guards can seat when closed. It also helps them to find home position more easily. I just realized that I designed in some overtravel into the spacer and kicker to all the blade to move past the sear and catch it, at normal position it rotates 178.25°. I should have made the dotted line notch a bit deeper, right now the guard won't allow overtravel.

Looks good but do you have someone who will build it for you yet?
Top

I'm not much interested in having it built, but I am sure JimBrown257 would whip it out in short order. Did you see the post on the last two he built for me?

I'm not much interested in having it built, but I am sure JimBrown257 would whip it out in short order. Did you see the post on the last two he built for me?

There are also links to the YouTube videos of them in action.

Yes, those were really something.
Top

'Tis surely nice to see how popular the concept of the Kriss bladed swinguard has become, especially with the creative efforts you demonstrate! Keep up the good work, and maybe some future day eye might commission ye to create the ultimate WJC unit...

'Tis surely nice to see how popular the concept of the Kriss bladed swinguard has become, especially with the creative efforts you demonstrate! Keep up the good work, and maybe some future day eye might commission ye to create the ultimate WJC unit...

I thought you were the ultimate unit. Glad to see you checking in!
Top

Mall ninja blades with zero practical value....I never liked them or could figure out a use for them...lol
Top

Yeah, I tried to fillet a fish with one and didn't have much luck.
Top
Post Reply
14 posts • Page 1 of 1