Does anyone have a knife from this series with the original chain and button-loop?

(I say "series" because the seller told me that these were made in several iterations;
for instance, an identical knife except that the words "five cents" are embossed into the handle.)

I just picked this up yesterday and would be interested to find out whether the hardware is original to the knife. Thanks! 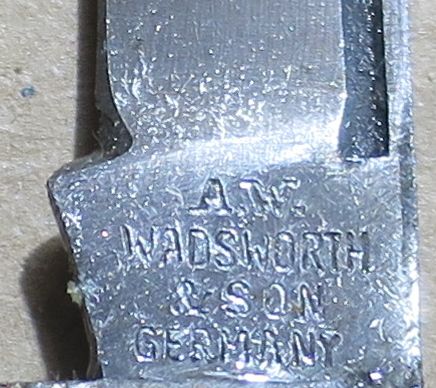 Where is the button?
Top

The button is on your shirt -- !! This knife is a manual folder. The wide part of the button loop (at the end of the chain) goes over your shirt button, and then the loop is slid down so that the narrow part rests securely behind the button. The knife goes into your pants pocket. This prevents loss of the knife, back when boys ran around doing stuff outdoors instead of gaping at a video screen all day.
Top

I’ve got a repro catalog with this ad ... 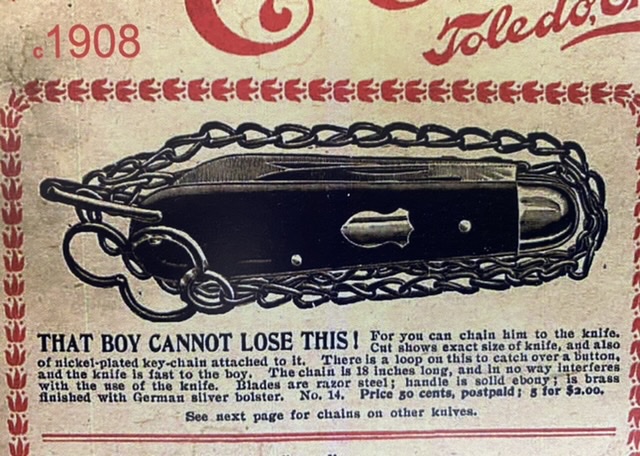 Mike ~ Thanks for the picture! The chains are not exactly the same but they are pretty close. The length of my chain is just over 14" (counting the button loop). Possibly my chain (and knife also) were made less expensively than the outfit in your ad, so that a lower price could be offered. The stamped-steel handles on my knife, for instance, were probably cheaper to make than the attached scales shown in your ad. Thanks again for the input!
Top
Post Reply
6 posts • Page 1 of 1