Forum rules
There are a few things you should know before posting in these forums. If you are a new user, please click here and read carefully. Thanks a lot!
Post Reply
18 posts

Recently i bought this rather large & sterile Solingen made scout knife from the '50's or '60's as a modifying project.
The plan is to change the blade from a low saber grind with a buffed to death obtuse edge into a full convex grind with a crisp apex in the region of 30 degrees inclusive.
This would remove the current non-matching grinds on both sides of the blade, make the knife a much better overall user & chopper, and it would also help to make the saw/notcher on the back work a bit better.

Next i'm going to exchange the current miniature guard for a larger and more functional version, give the handle a bit of a palm swell for a better grip when chopping, glue all handle parts in place, and finally treat the leather & fiber washers to a few coats of beeswax.
I will also restitch the sheath as the old thread has dryrotted away completely.

The knife as i received it:

About 2 montsh ago i bought a cheap but speed controlled Parkside PBS 900B2 belt sander together with 2 sets of equally cheap aluminium oxide belts at the LIDL supermarket for just under 50 Euro, mainly for the straightforward thinning/regrinding of kitchen knives, which it does very well.
I spray the belts with WD40 before use, which helps to cool those thin blades during grinding quite effectively, plus it makes the grit cut noticeably faster.

I've used this machine for the first two rough reshaping steps on the scout knife, and this is how the blade looks atm.
I tried to avoid as much as possible grinding to a burr, and further convex shaping will be done by hand with various wet & dry SiC papers backed by a glossy magazine.
The sheath has also been restitched by hand with strong white nylon thread plus i waxed it twice with Granger's beeswax.

Refined one step further plus sharpened to a burr with 180 grit SiC wet & dry paper on a glossy magazine, then removed that burr with a Paper Wheel coated with 1.0 micron diamond compound.
The apex of this temporary edge fits almost perfectly in the 35 degrees slot of my Tormek WM200 AngleMaster.

Afterwards went to the forest for some testing, and the steel seems to hold up just fine (with this edge angle) for some chopping through various thick green branches as well as a solid chunk out of a dead tree.
Upon inspection i couldn't see any damage, and the edge also still shaves the hair from my lower leg with ease.
I think the steel can handle a bit thinner edge.

This is how the knife looks at this moment:

As the knife seemed to perform just fine chopping wood with an edge of +/- 35 degrees inclusive i decided to grind the blade a bit thinner with a new edge angle of +/- 30 degrees inclusive, according to the motto: as thin as possible, but thick enough.
Most thinning was done on the belt grinder, after which i proceeded on the piece of previously used grit 180 wet & dry SiC paper on top of the glossy magazine.

Due to the waterproof black marker lines on both sides of the blade as well as on the edge apex i could see quite well where the machine removed the steel (up to just before the actual edge area), after which i continued grinding manually on the grit 180 SiC paper to let the sides come together in a new apex (with a slight burr)

Before thinning on the belt sander, still with the black marker stripes on the blade:

After thinning on the belt sander (first with grit 100, then grit 120), with the edge area still black from the marker.
Although the belts have 2 coats of WD40 oil for cooling during grinding, plus i also dunk the blade into a bucket of water for extra cooling in between passes, the blade is getting progressively thinner, so the chances of overheating the newly forming edge area would still increase if i just ground up to a burr with the belt sander.
This method avoids not only the overheating part, but also the forming of a thick burr from the grit 120 belt due to which quality steel would be wasted needlessly.
I also use very little pressure on the belt (about the weight of the knife itself) and let the machine do the work.

After hand grinding on grit 180 SiC paper, where the edge area now has been blended in with the sides of the blade.
The black marker is gone and the new apex fits almost perfectly into the 30 degrees slot of my Tormek WM200 AngleGuide.

While difficult to photograph, the visible burr over the entire length of the edge shows that there is now a complete apex, a tell tale sign that grinding with grit 180 is done.
Soon some further refining steps with grit 240 and grit 400 will follow.

During the sharpening movement from the back towards the apex i gradually lighten the pressure to as light as a feather, so the area that forms the actual apex gets refined almost without pressure (literally a fraction of the weight of the knife)
This to avoid enlarging both the current edge angle & the existing burr, something that is real easy to do with even a fraction too much sharpening pressure on that area.
I also check the edge every now & then with my Tormek angle gauge (also in the pictures), as even though the edge is convex, the gauge would show any dimensional changes immediately.

The knife as it looks at the moment:

Refined a bit more with 400 grit wet & dry.
There are still a few faint scratches visible from the 240 grit, but before i proceed with finishing i first want to find out if the current edge angle of +/- 30 degrees inclusive holds up in actual use.
Next step will be to remove the burr on a hard leather strop with 1.0 micron diamond paste and to grind off the slight protrusion on the heel, then hopefully somewhere in the coming week do a bit of chopping in the woods.

Yesterday i got the chance to test the knife again in the Veluwe nature reserve near Kootwijk, this time with the somewhat thinned out blade & an apex that fitted the 30 degree slot in my Tormek WM200 AngleMaster almost perfectly.
The area has a lot of walking trails, and the knife was used for the clearing of overgrowth etc.
In short: it performed very well in that role & with the thinner edge angle.

When i left home the edge could just whittle a chest hair towards the hairpoint (more like slicing it diagonally, so no long thin curls), and after chopping through quite a bit of green branches varying in thickness from pencil-size to that of a grown man's upper arm as well as the small fallen tree in the pictures the edge could still shave the hair on the back of my hand on skin level.
Not quite as easy as before, but it could be done.
Also the weight of the knife together with the full convex blade shape made the knife an excellent chopper that bit deep without ever getting stuck: the wood had no grip on the blade whatsoever.
Wristsize green branches would take 1 chop, while upper arm thick ones took 3 to 4 chops.
The knife also performed well on thinner stuff like twigs and bramble shoots: 1 light chop without feeling any resistance.
I'm sure that a thin lightweight machete would do better in the last category, but the knife was no slouch either.

There were also some negatives:

- The current "guard" is much too small to guard anything, and it's more a pointy nuisance than anything else.
- The leather handle is thicker in front and tapers towards the pommel, so when chopping wood your hand naturally shifts to the very end of the handle.
Although this position works very well for harder chops on for instance the small tree in the pictures, the current handle shape is not the best for snap cuts, like you would mostly use on anything thinner.

Both of these things i hope to solve in the coming weeks.

A few impressions of the sand drift that forms the center of the wooded area:

Currently busy making the new guard from a flat piece of brass i had lying around from a previous project.
The center hole that was already there was enlarged with a file to fit this knife, the rough outer shape was cut out with a small hacksaw, the result was ovalized on a normal bench grinder, after which the outer edge was ground square on the Tormek.

More testing is needed to decide upon the final size & shape of the guard, so it's likely there will be changes in the near future.
The old guard was reshaped & reused as a cover plate on top of the new guard, but i still have to fit things a bit better.
Put the knife together temporarily for the pics.

Kwackster
Thanks for taking the time to post this and explain how the blade alteration has made chopping and edge retention better with the thinning of the blade and angle.

I love that knife you are working on as i am looking for a good quality and weight bush knife that can still take on smaller tasks .

I have no tools unfortunately to make the alterations but once again beautiful knife and great step by step explanation for myself a laymen in these things.

I would love a knife like that and i'm going to keep an eye out for one even though its difficult here in the uk as i cant bid on anything knife like from America on ebay , as it circumvents their knife policy.

You've done a lot of good work on that knife and it was very educational on how you did the work and why. Thanks for your posts!
Top

The knife as it looks at this moment.
I made the guard a bit smaller, rounded the edges, then sanded & polished the brass a bit on a felt wheel with some green compound.
Glued it back in place with 2-component epoxy, then glued all the washers together on the tang and put the pommel back on with some Teflon tape on the threaded tang end.

After testing the knife a few times in the woods i modified the handle a bit more to my liking.
Next i recolored the leather, and soon a few layers of Granger's wax will follow.

That's a great knife and Taylor made by yourself to suit your purpose.

I am banned from bushcraft or anything strenuous for a while ,but i'll keep looking on ebay and your link for a suitable knife to send you for modification .
I have a few knives in my collection that I need help reshaping ,i'll have to speak to you and sort something out when I feel a bit better.,or to see if you have time.

I have just bought an old frosts mora 311 ,for 14 euros posted , but it needs cleaning and sharpening and a sheath making ,I have some kangaroo skin somewhere for this .

Thanks once again for the great pictures and step by step talk through of how you worked on the knife.
Great post,fine knife.

The knife at this moment.
(Click 2 X on the pics for more detail) 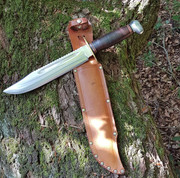 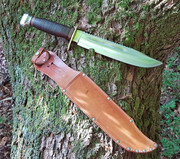