Forum rules
There are a few things you should know before posting in these forums. If you are a new user, please click here and read carefully. Thanks a lot!
Post Reply
11 posts • Page 1 of 1

Given to me by my late father, he knew i collected blades, so i was the most suitable candidate
for this piece of history.
There is a little story to it, it was taken from a captured Japanese soldier during the war in Indonesia in the 1940's
my father took it home as a souvenir.
He told me that there were 5 carvings in the handle, 3 thin and 2 thick ones witch represented 5 kills
3 soldiers and 2 officers.
There is also some engraving, maybe it's interesting, thought i should post it here.

It's origin is Japanese i think. 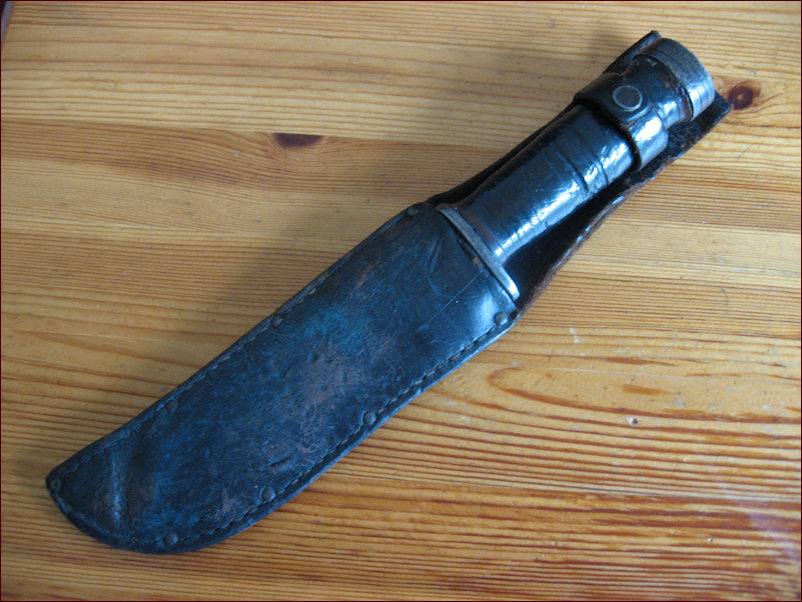 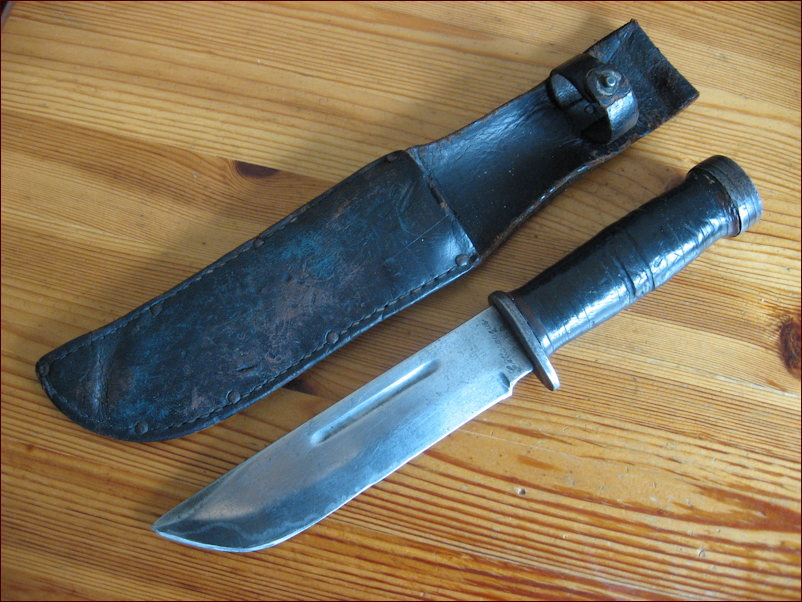 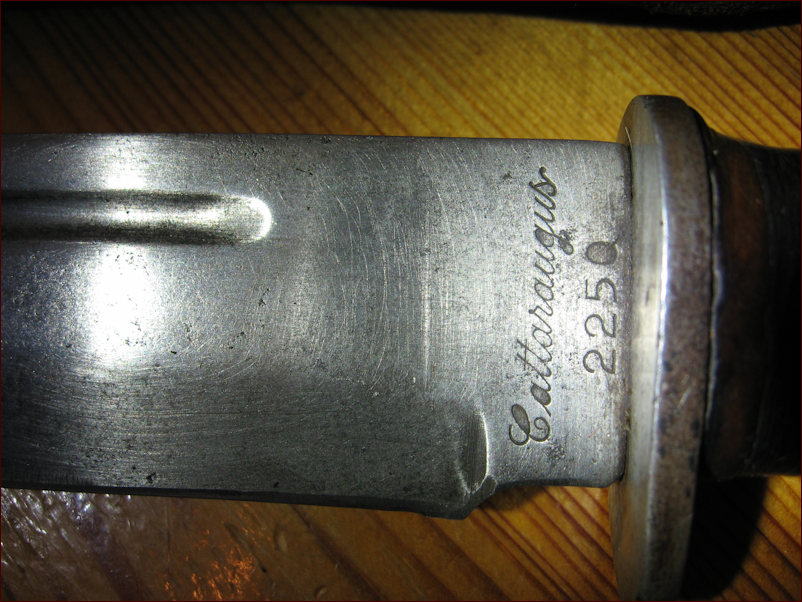 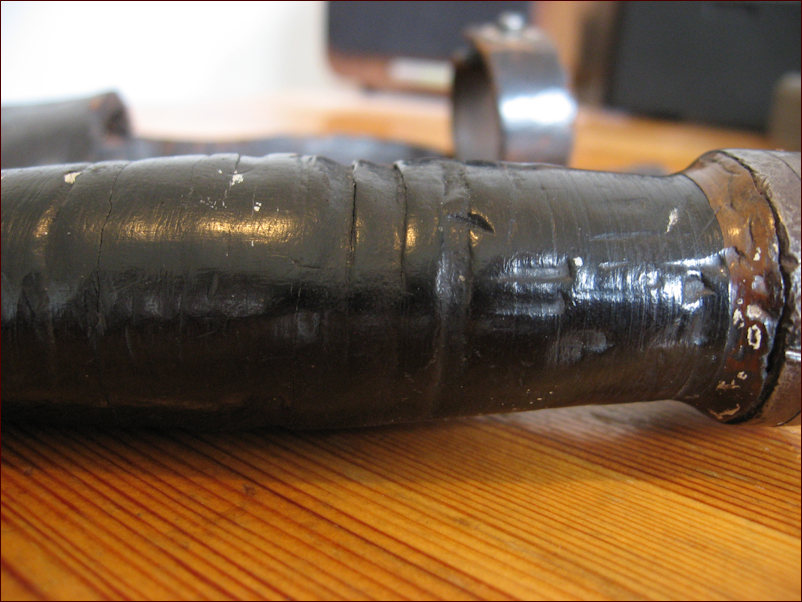 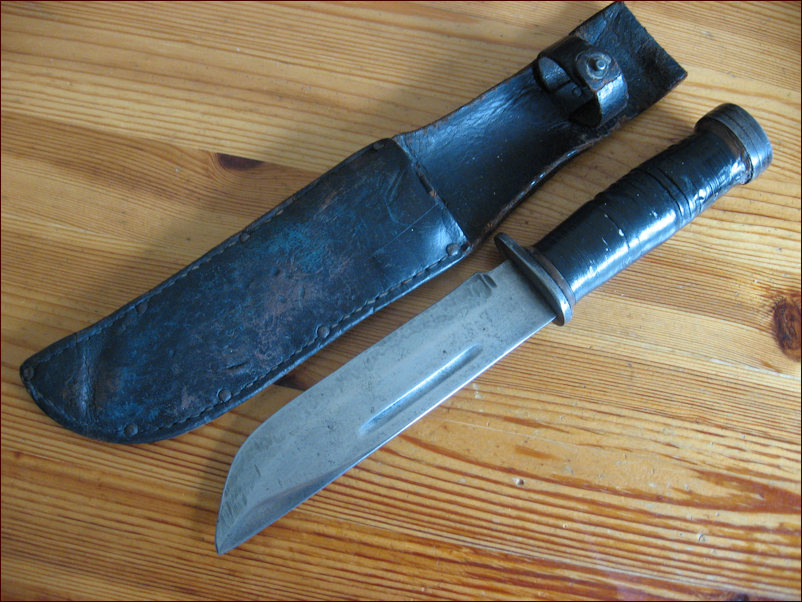 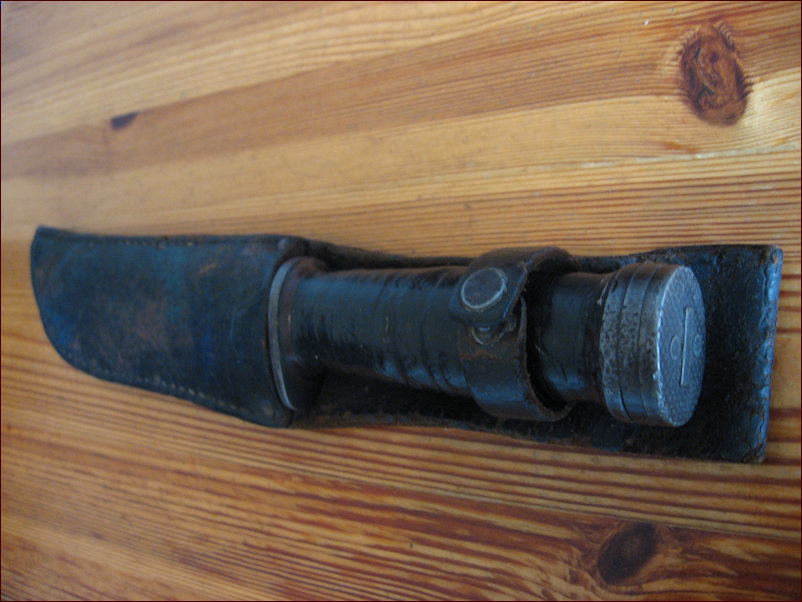 The knife is not made in Japan even though the name could throw your thoughts there being written in script like this.

The knife is an American cattaraugus 225Q ....the Q stands for Quartermaster and it was a great knife used by the marines /rangers etc in the ww2 theatre.
Google "Cattaraugus Quartermaster "to find a lot about their history and very highly thought of reputation .

They are super sturdy and well made but many blades and handles succumbed to the harsh tropical jungle conditions where the handles would be literally eaten off .by humidity ,along with many weapons with high carbon blades.

Your knife is in really nice original condition with a nicely patinated leather sheath and the handles leather washers look to have survived well .


Thanks for showing us part of your families history...I love war knives ,they ooze quality and character.

Thank you for the comment gravknife, in my younger days back in the 70's i painted the leather sheath with waterpaint in native american tribal colors and patterns, when playing cowboys & indians, i liked to be the indian, you can still see some red and blue,
other kids had plastic daggers, i had a real one

i didn't know about the history back then, the dagger just was there among some other tools.
But some years ago my father past away, and left me his dagger, now i keep it in my collection.
Top

Very good, Ian. (You took the words right out of my mouth)! You are spot on!

Thanks for your research.
Fishtail Picklock
Top

Yes, thanks for the research, i have seen some on eBay but they are in not so good condition as this one
and to me it's a special piece because my father gave it to me who was there in the 1940's.
Top

I love your story of the knife ..... from your father where the knife was used for real buisness in the war then used by yourself asca lad to play cowboys and Indians .....a true family knife that will live on with these stories a ttatched to It .
It is why I have a passion for most military knives and knives in general ,i always wonder what action they have seen and who's hands they have been through before they came to me....fascinates me .

Its even more poignant when the knife has a family attached history like your example blademan.

Great to see and thanks

.. objects are more interesting when they have a history and a story to tell
especially these kind of objects used in wars, surrounded by great drama and intense emotions
and harsh conditions that makes them indeed fascinating.
Top

Outstanding. Ian is well informed and his input is much appreciated.

Good news- The notches were most likely put on by the original owner meaning the kills were Allied enemy soldiers/officers.

Viking45 wrote:Outstanding. Ian is well informed and his input is much appreciated.

Good news- The notches were most likely put on by the original owner meaning the kills were Allied enemy soldiers/officers.

Story goes that my father took it off from a Japanese soldier who had attacked him with it, but it seems that it has not a Japanese origin, how interesting!
Many thanks again to all for your input on this.
I always kinda wondered if this was the knife Japanese soldiers carried, somehow it didn't fit with what my idea was of a Japanese soldier's knife
back in the days when there wasn't internet.
About the notches, my father also said that they (Japanese soldiers) were known for doing this.
In my opinion in every war there are only losers, and any kill allied or not is a terrible waist of life.
Top

that is some interesting piece, you should keep it and cherish it.
Top

Billy02 wrote:that is some interesting piece, you should keep it and cherish it.

Thank you, i will.

It has seen a lot of history surrounded by intense emotions.
Top
Post Reply
11 posts • Page 1 of 1