Forum rules
There are a few things you should know before posting in these forums. If you are a new user, please click here and read carefully. Thanks a lot!
Post Reply
7 posts • Page 1 of 1

I recently acquired another of the so-called British Commando knives. This one, I noticed, has a flat on the blade in the manner of the earlier fairbairn-sykes knives. With the fairbairn-sykes, this is said to indicate a hand-ground, early blade. Since the same variation seems to exist in the Commando knives, does it also indicate an earlier knife? 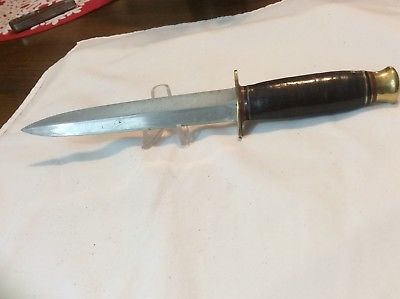 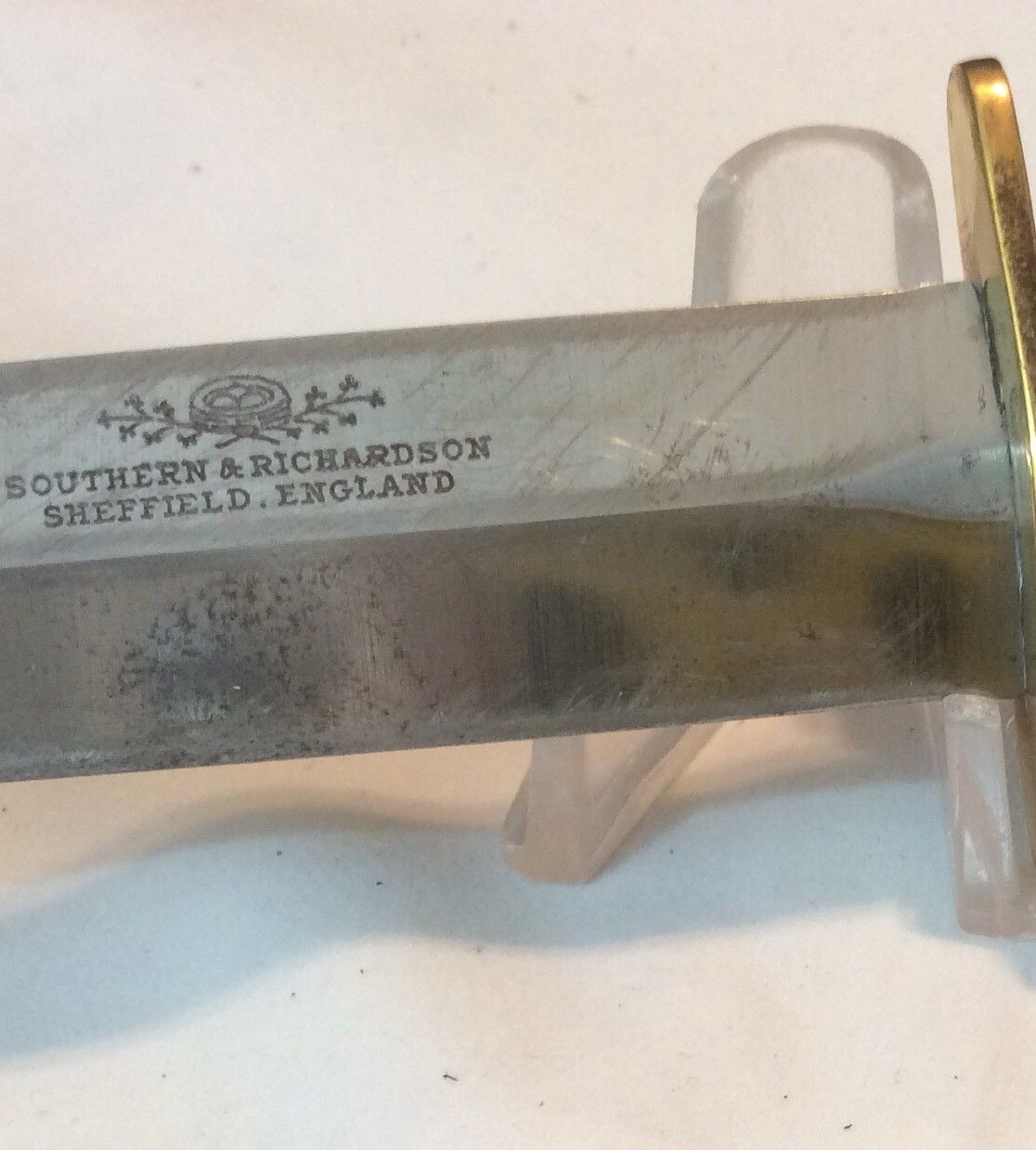 The v on the commando daggers signified where the grind wheel finished allowing good fitting to the guard via the blade ....whereas machine ground blades we're ground on the tang just above the guard.

I absolutely love that Southerner mate ...a beauty and in nice condition with the Southern and Richardson legend left nice and clear,and the leather grip in good order.They bring good money too when they turn up ,the last I remember was on gun star a while back.

I heard somewhere that some of these were often bought by commandos (private purchase )and used in the war ,and it just looks a cool and functional killing knife ,that was different to the norm i.e. the F.S.

I don't know wether or not the handgrinding denotes age being early as I have seen 1st 2nd and 3rd models Fairbairn Sykes with this feature ,you just had to pay more for a hand ground blade I presume ,and it was probably taken more time over when hand finished like this.

I know that Southern and Richardson of Sheffield made military contract knives in ww1 and 2 and many knives in the Victorian era from 1845 right up to 1975 I remember reading it on line when looking up a straight razor I have.

Thanks for sharing it Jim...I would love a F.S second model sterile or B2 marked ,its another dream knife .I only have a 3rd model William ROdgers from post war as an example.

......I try to buy my switchblades but you keep popping up with some great military type knives that I would love to own.

I just bought an Egyptian commando knife a little while back but its been hidden by the wife as a Christmas present as she got it first from the postman .

I'll post a picture if you like after Christmas I am dieing to see it myself as I have never had one before.

I hope your well mate, please keep these knives coming as I really love them .

All the best
Ian
Top

Hello Ian,
Thanks for the reply. It is a nice knife, and my first Southern Richardson. As I understand it, the third type FS used some hand-ground blades left from the second type. Once those ran out, The Story Goes that they then went to machine ground blades. At any rate, like you, I love the daggers and the military knives.
Yes, please post a picture of your new dagger when possible.
Jim
Top

Heres a couple of pictures of the Egyptian comma do dagger.
I think it is a WW2 piece possibly 1950s .I can find little about these knives Jim and would be grateful if you could ask on your other forums .

I spotted 1 about 10 years ago on a knife sellers site but they wanted too much for it.

Its a lovely balanced knife for fighting and has some good heft for slashing and stabbing.
The blade is high carbon which has been blacked .It has 3 dots punched into the blade plus an elongated line, i surmise these are blood grooves but could have other meanings to the Egyptians .
The guards are part of the blade .
The handle is bakelite heavy copper riveted to the full tang.A real sturdy knife .
Blade is 6 inches handle 5inches .
Came in its original leather sheath which is blood stained and has heavy use by the looks of things.
I really love this knife its like a heavy spear head with a handle and would make a fearsome weapon in the right hands..

I hope you like it Jim .It was better than all the socks and underpants i received.
Hope you had a great Christmas my freind

Very interesting knife, Ian. I've never seen one just like it before. Congratulations on another fine acquisition.
Merry Christmas, and I hope you and yours have a happy and safe New Year.
Top

Around these parts we'd call that one hell of a pig sticker! Super nice score Ian.
Top

Jim-mi
Thanks for the kind words.
I havn t seen a lot of these myself .It's like a boot knife on steroids but beautifully balanced .
I have missed my guess if this knife doesn't throw really well .

Sammy
It is as you say a good "pigsticker".
It's main use would be dispatching sentries silently by severing the spinal chord at the nape of the neck.Quite deadly in the right hands .

I hope you had a good day today Sammy with your family .
It's been pouring down here in the U.K ,my daughter wants me to take her for a drive to see all the Christmas lights people put up in their Windows and gardens.....I am stuffed full of Christmas dinner and want to have a sleep ....she will win

Look after yourself Sam and have a good new year.