OK, all of us here like knives and there are many enthusiasts out there, some who try to make their livelihood with this obsession. However, one thing is certain - we all have different likes and dislikes. When I described this knife to my friend Doug, who earns his daily bread buying and selling, and without him even seeing the final result, he told me that I had destroyed any value that the knife had by customizing it. Since these were pretty common and readily available, he was working down in price from the $50 or so these can be had for. He's entitled to his opinion, and he is probably correct in his analysis, but I don't plan to sell the knife and I was not looking for profit. I just think it's very cool and I'm delighted to have it in its customized form from Duke Charlesworth and Neil Fehr.

I bought this from, I believe, BudK, and they are the purveyors of all sorts of economy knives. It's an Expendables II movie knife, with the Gil Hibben stamp. Gil probably designed it for a fee, and the Chinese have ginned them out by the millions. I liked the looks of the piece, especially that "Arkansas Toothpick" style blade with the brass overlay, but I had a problem with the handle. The thing was so massive, I couldn't get my fingers around it and it just didn't feel comfortable. I wanted to preserve the Expendables logo, but Duke said it just shattered when he was trying to cut off the old handle. Oh, well, that's life. Meanwhile, I saw this wild piece of crown stag carved by mountain man aficionado, Neil Fehr, of Plum Coulee, Canada. It was massive, nearly 7" long and I bought it. I think I gave more for it than the knife. The cool thing was that it fit my hand great, even though most of the carving was on the 'off' side. (Neil must be a lefty.) Once I had both pieces in my hands, then it was only logical to combine them, and for this I enlisted Duke's help. Duke happened to have that wild stainless guard lying around, which reminded him of a pirate cutlass. I think it looks stellar. He also welded on a piece of threaded stud, not that we could screw on a pommel, but just to give the glue some extra bite to hang on to the tang. Duke added a piece of black micarta and a couple of stainless washers after shortening up the new handle just a bit. His instincts were right on. It's a big knife, and it doesn't look pretty old-timey and piratical, but that's totally perfect for a crazy fool like me. I am indebted to Duke again for his fine craftsman ship and I constantly wonder why he puts up with me.

That's my story, and I am sticking to it. Your comments, questions and suggestions are greatly appreciated. More crazy posts to follow. (BTW all pictures being hosted by https://imgbox.com/.
Dave Sause
oldandfat@cox.net
(405) 694-3690

I like it. I'll take stag any day. What you have created is a "Hunting Cutlass". Do a nice leather sheath for it and make a matching smaller paring knife to mount on/in the sheath.

Doesn't look "destroyed" to me!
Top

Looks pretty good to me too! Looks better than the way it was made new.
Top

Should have been made like that from the start......
Top

Outstanding. Looks like it was meant to be that way.
Top

BruceS wrote:I like it. I'll take stag any day. What you have created is a "Hunting Cutlass". Do a nice leather sheath for it and make a matching smaller paring knife to mount on/in the sheath.


sammy the blade wrote:Looks pretty good to me too! Looks better than the way it was made new.

Thanks, Sam, you're ever so kind to say that.


TazmanTom wrote:Should have been made like that from the start......

That may be stretching it a bit, Tom, but I sure like it better now. Thanks.

Thanks, Don ... but then you are easily impressed!

daddyloko wrote:Outstanding. Looks like it was meant to be that way.

Here is a cool Hunting Cutlass. Only one I have ever pulled out for the "Woods". Same Landau guard style. Back in the day there were used in hunting.

Here in Texas, south of here going towards the Rio Grande Valley guys hunt for hogs with dogs and only use large knives in the hunt to dispatch the hog once the dogs get it pinned. They don't use guns. I saw signs on 281 for these hunts. Nothing I would want to do. 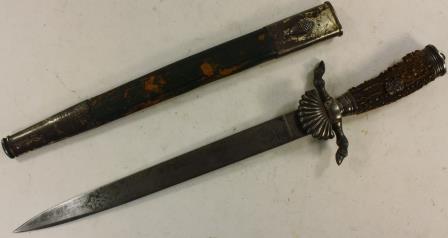 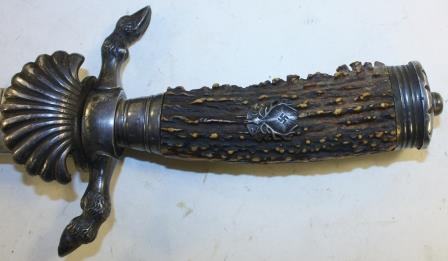 Interesting, any idea when it was made?
Top

Excellent Dave, G. Hibben has been making knives for many years including lots of over-the-top knives for movies.
Read an article where he makes several extremely high quality customs for the people making the movie and he works with the actors to make sure the knife fits them. Replicas are then made in case one gets damaged but the close-ups are Gill's originals.

I recall the first time a movie really influenced the knife world was Deliverance when Jon Voight carried a big (not 100% certain but I'd bet a 100 bucks) Western Bowie.
That film also made every outdoorsmen want to run out and get a bow.
Dirty Harry set the gun world on fire in 1971 with his S&W Model 29.(he also stuck a stiletto in Andie Robinson's thigh)
https://www.youtube.com/watch?v=yr-HmSz421c
The first two Rambo knives were made by Jimmy Lile and the Rambo III was made by G. Hibben.

Dave
I really love what you and Duke have accomplished with this knife.
I love the stag and the guard and the blade is beautifully polished giving this knife a much more handmade look than when you first got it.
Tbh i would easily miss the expendables knife if browsing through a knife catalogue but i wouldnt miss the newly mangled piece of eye candy you have both come up with.
Congratulations on yet another stunning unique knife ,and thanks for giving us a look at how it all came together.
Take care my good freind.
Ian

Bruce
I really love that shell guarded hunting knife.
It oozes quality and the stag is excellent.
These are rare now and that is a very high quality older example.
Thanks for sharing it my freind and i hope your well.
Speak soon.