Hello all
Many years ago i watched a film called the hunted with Tommy lee jones and benitto del torro.
I absolutely was in awe of the knife in the film and its design but at the time there were no manufacturers of this knife anywhere.
I had bought an old german meat cleaver for a pound from a car boot sale.It was marked ochsenkopf 20 and it was in very poor condition with a lot of chips to the cutting edge and the back edge had been used as a hammer.
I did a few sketches and set to work with a drill a grinder and stones and got a basic shape of the knife i wanted.
It had to be a fair size cutting edge and the head had to be left heavy to allow a fair axe for chopping.
After a while i realised it was not quite the knife from the hunted but was a great outdoors survival tool especially for hut building ,carving etc as i cut a thumb geoove on the back edge for carving control.
The long cleaver handle worked well when using as an axe as you could grip it lower down.
I sruggled to make a saw on the top edge as i only had files and messed it up a bit ,but it worked well enough for some tasks.
Its fairly light and razor sharp ,still would love the knife from the film ,i had paused the video numerous times trying to draw it in sifferent angles and i had no computer at that time.
Has anyone got similar outdoor knives ,survival knives they may like to share .
Thanks for taking a look. 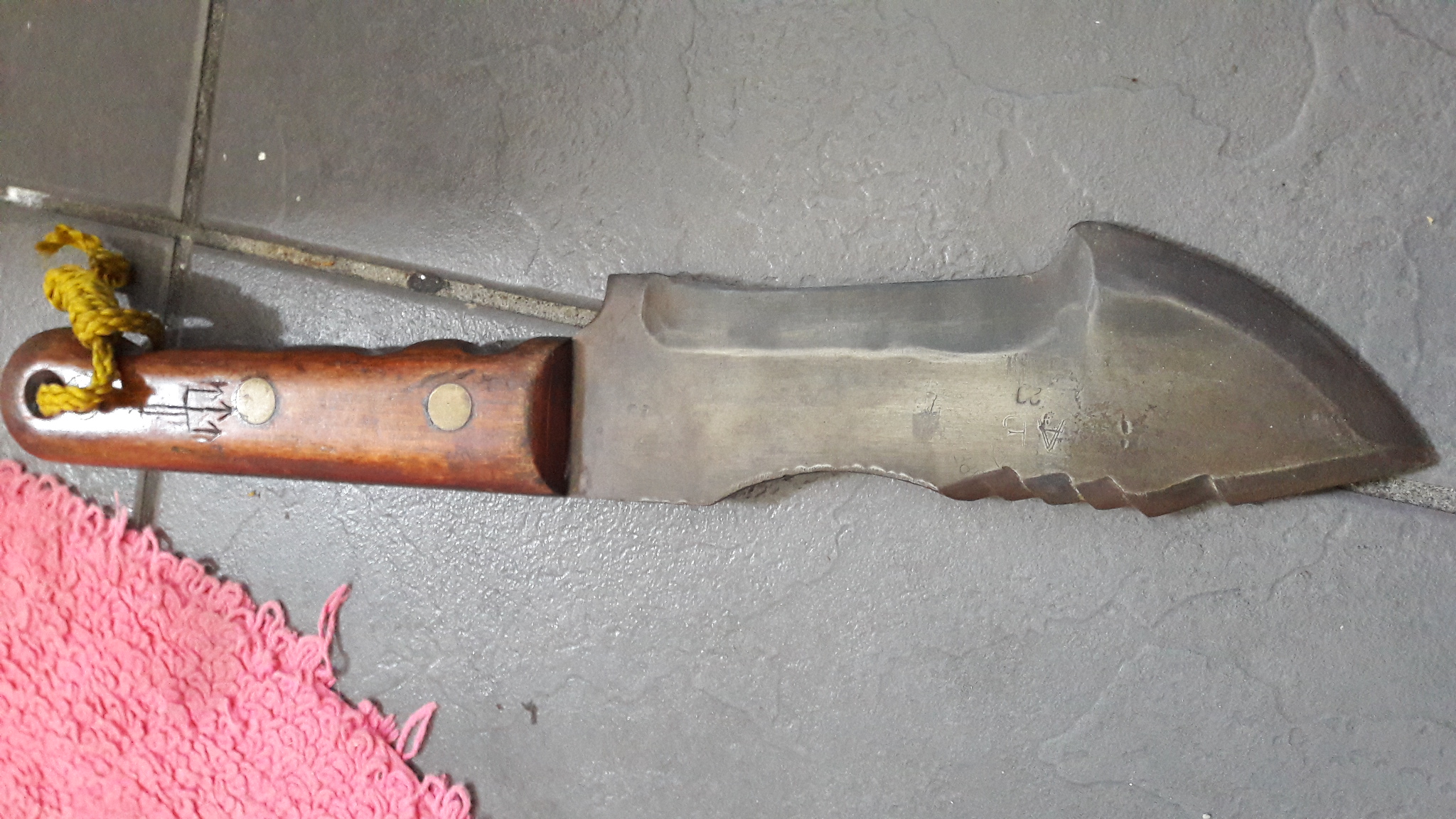 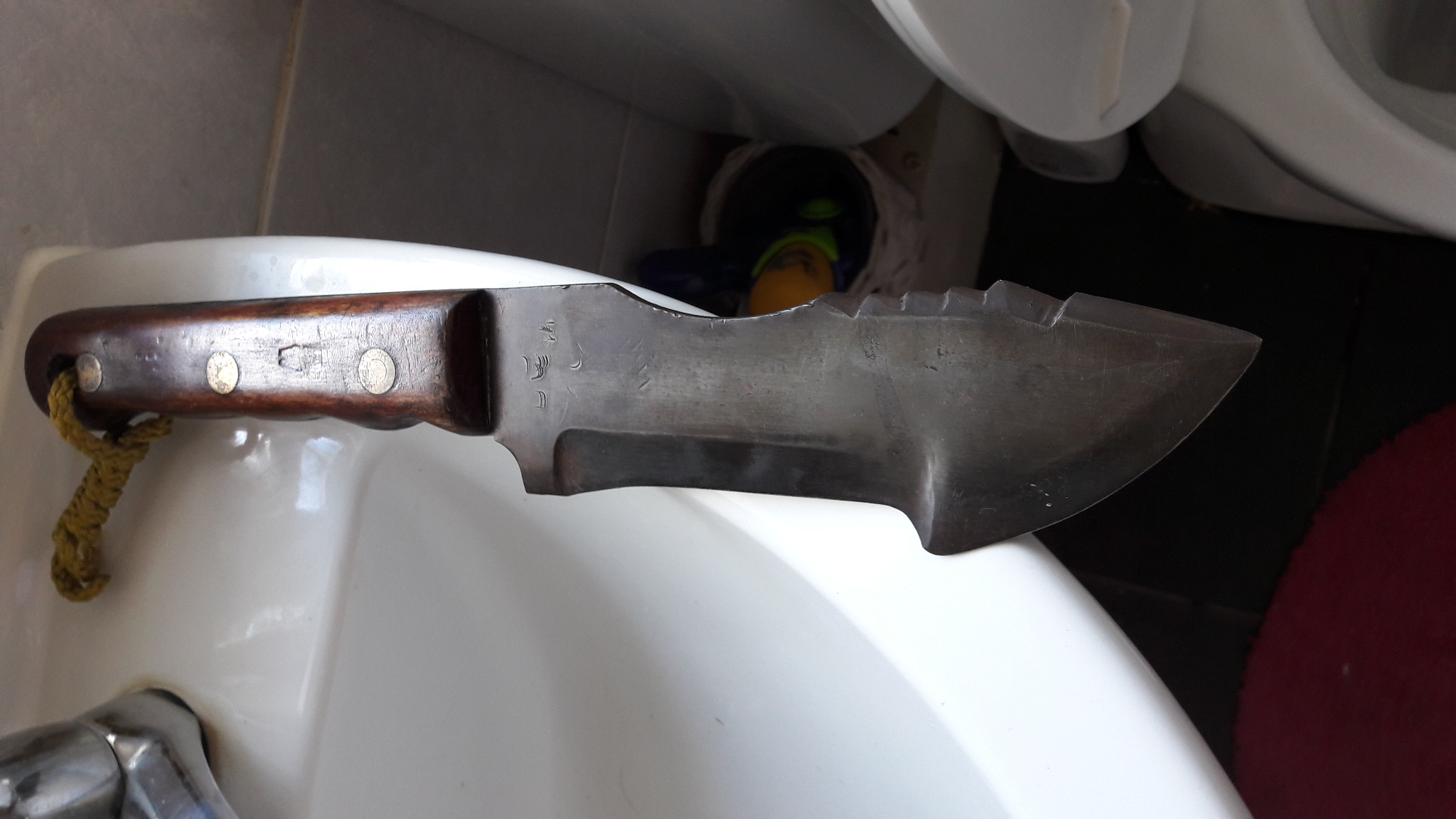 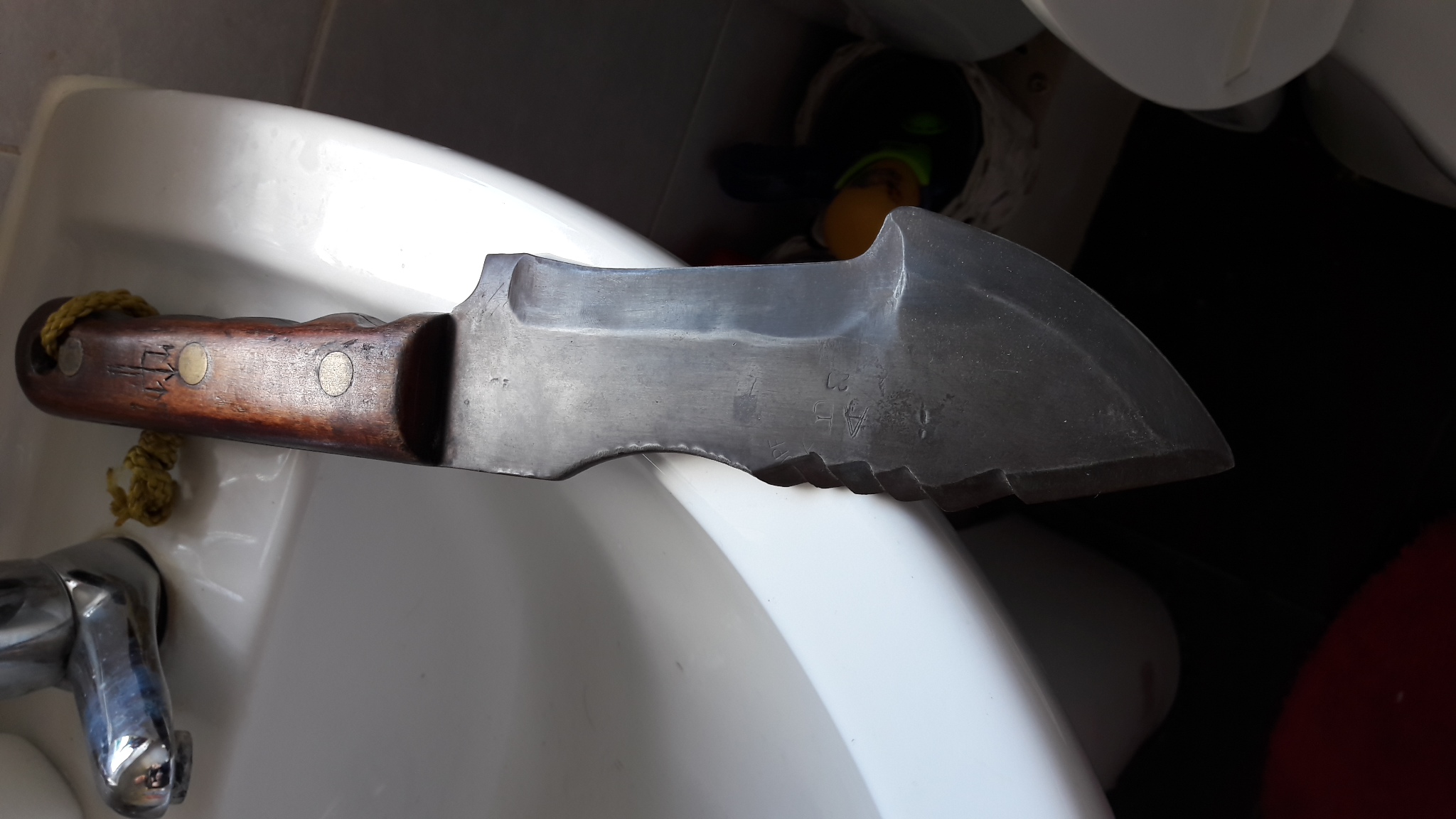 I've seen some on amazon with a similar blade design.
Top

Take a look at this topic.

Often times you see a response to a thread that seems very personal, like we were just a couple of guys sitting at the pub over a pint and I'm tempted to reply in private ... it's a private conversation, ya know? Anyway, there's nothing really that you have said or I want to say that needs to be kept private and it's so great that there is a place where we can talk about things even though the logistics of meeting in that hypothetical pub are astronomical.

I am a huge movie geek, and like many knife guys, I suspect, I have a short list of films that I love strictly because they have a knife theme or maybe only one cool scene (like where Steven McQueen does Martin Landau in Nevada Smith). I'm the kind of guy that will buy a DVD of those movies, just to have them ready anytime I want to watch them again, and again, and again. I have a terrible DVD copy (fuzzy video) of Alan Ladd portraying Jim Bowie in the Iron Mistress.

On my top list of movies is "The Hunted", or more specifically, two different movies with that title. The first is the Christopher Lambert flick where he gets caught in the crossfire between Samurai and Ninjas in modern Japan, and it's full of building and using 'samurai' swords and the whole ethic of the blade. I figure you will love that one and you should check it out. The other is the Tommy Lee Jones & Benedicio del Toro one you alluded to. What an epic battle at the finale!

I compliment you most deeply on your attempt to reproduce the knife, which is almost a character itself in the movie. You really set yourself a challenge to build that one and I think that you did a superb job considering your experience level at the time and what you started with. Kudos, my friend, that is an amazing rendition. It may not be shiny and pretty, but it sure seems like it will get the job done.

So thanks for the wonderful post, it really rang a sympathetic note with me, and I wanted to respond in kind. Keep those posts coming, mate, you're definitely my kind of guy.
Dave Sause
oldandfat@cox.net
(405) 694-3690 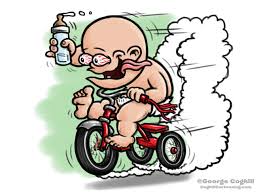 GRAVEKNIFE, CHECK OUT ''TRACKER KNIFE'' AT THE TOPS KNIFE SITE. YOU'LL GET A GOOD PIC, ALSO THE WOOD SAW ON THE BACK IS USELESS, SINCE THE TRACKER IS 1/4'' THIC

TRYKER,Dave ,lance and Sammy
Thanks for your links and interest in this my freinds.
The real hunted knife was made by David R Beck WSK knives,its an absolute beauty.Others argue it was The tops but The WSK looks like the real deal and more like the one actually used in the film
The tops version claims to be the knife but as you say its different and thanks to tequiza I read an interesting topic about this on another bladeforum,people have to make up their own minds but im sure the Beck is the real deal and its a beauty.The WSK has a 24 month waiting list and a heftier handmade price tag than the Tops but its the knife from the film imho.

I also love the flint knapped knives in that film and would love a go at hand knapping one if I could find the right sized piece of flint or obsidian.
This film really got to me and sent me a bit survival nuts.

I had a time of making weapons using what i could find in the woods but my primary material was slate which is okay but it shatters on strong impact and its edge retention is poor.
I made an axe ,knife and arrows plus a half decent bow using a Swiss army tool, IMHO one of the best survival tools available as it worked on the above tasks really well with its saw 2 main blades ,chisel etc..
I used sap from young conker trees as glue for the feathers ,young sraight branches for the shafts and shaped broken slate into heads using the knifes file.I have been told nettle stems make super strong bow strings when boiled and the flax twisted but i used my own string to wrap the arrow heads and for The bow.
The arrows needed stronger heads as they shattered on impact but limestone ones worked better ,but these take serious shaping and time unlike the softer slate i used.

These tracker knives made correctly are good solid survival knives,for skinning carving and cleaving ,quartering kills,I'm unsure of the throwing side as its a heavy knife but anything's possible ,I'd include a good wire saw,fishing tackle waterproof matches or fire steel and sharpening steel in a nice sheath compartment

Here's a few pics of my survival weapons and attempts.

All the best, and thankyou for taking an interest ,it shows I'm not the only madman on the planet who liked this film and the knives portrayed. 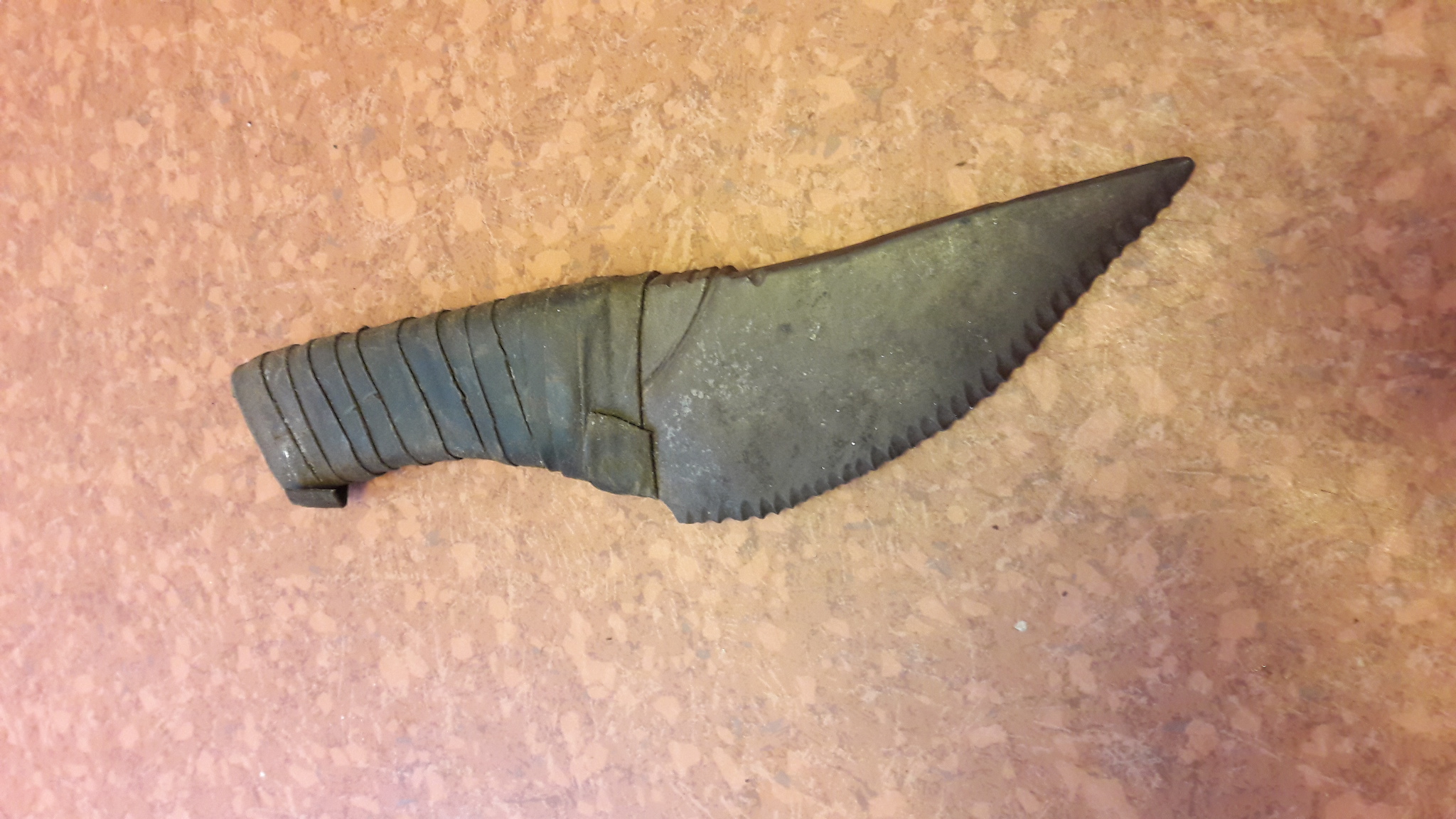 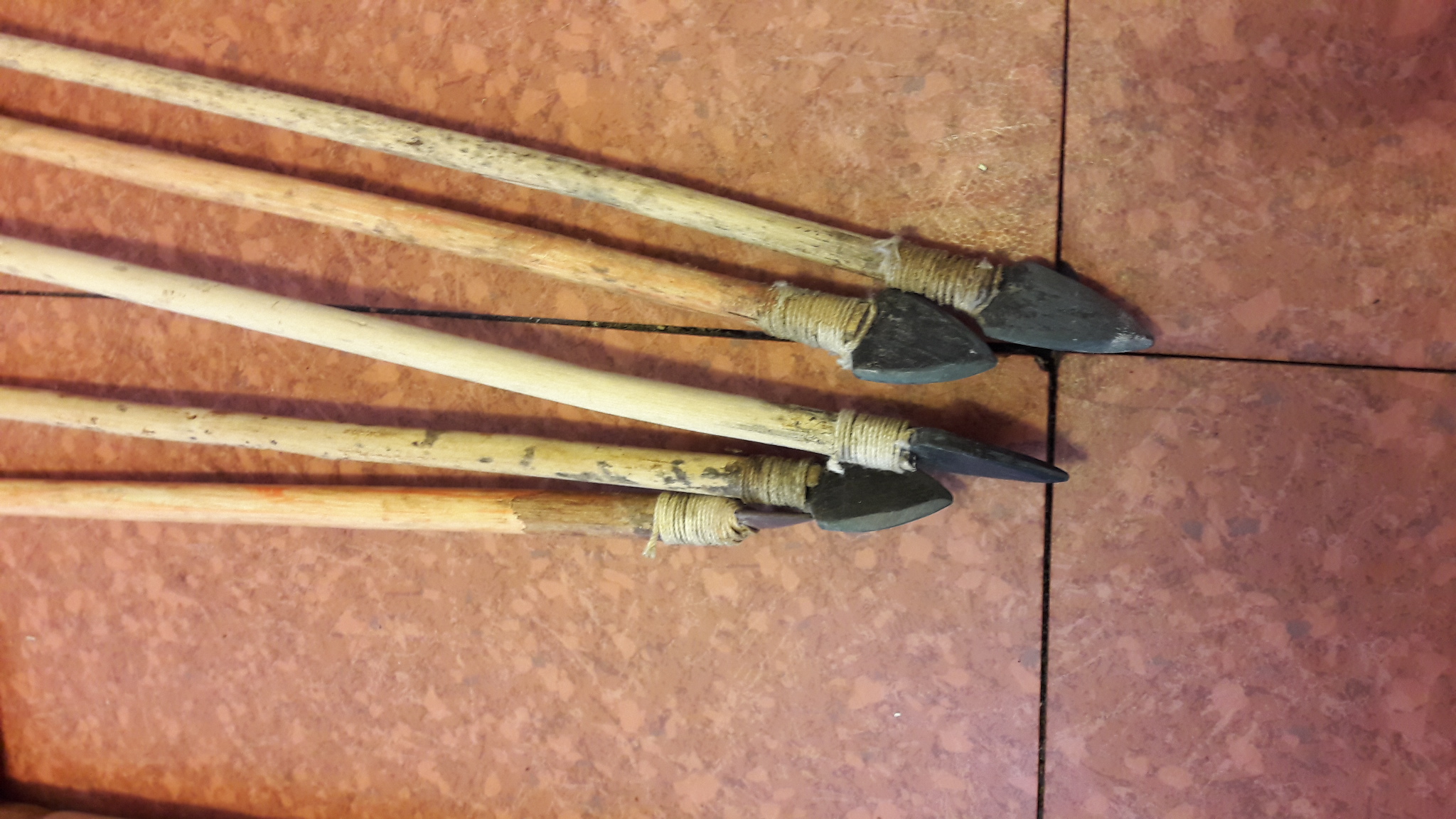 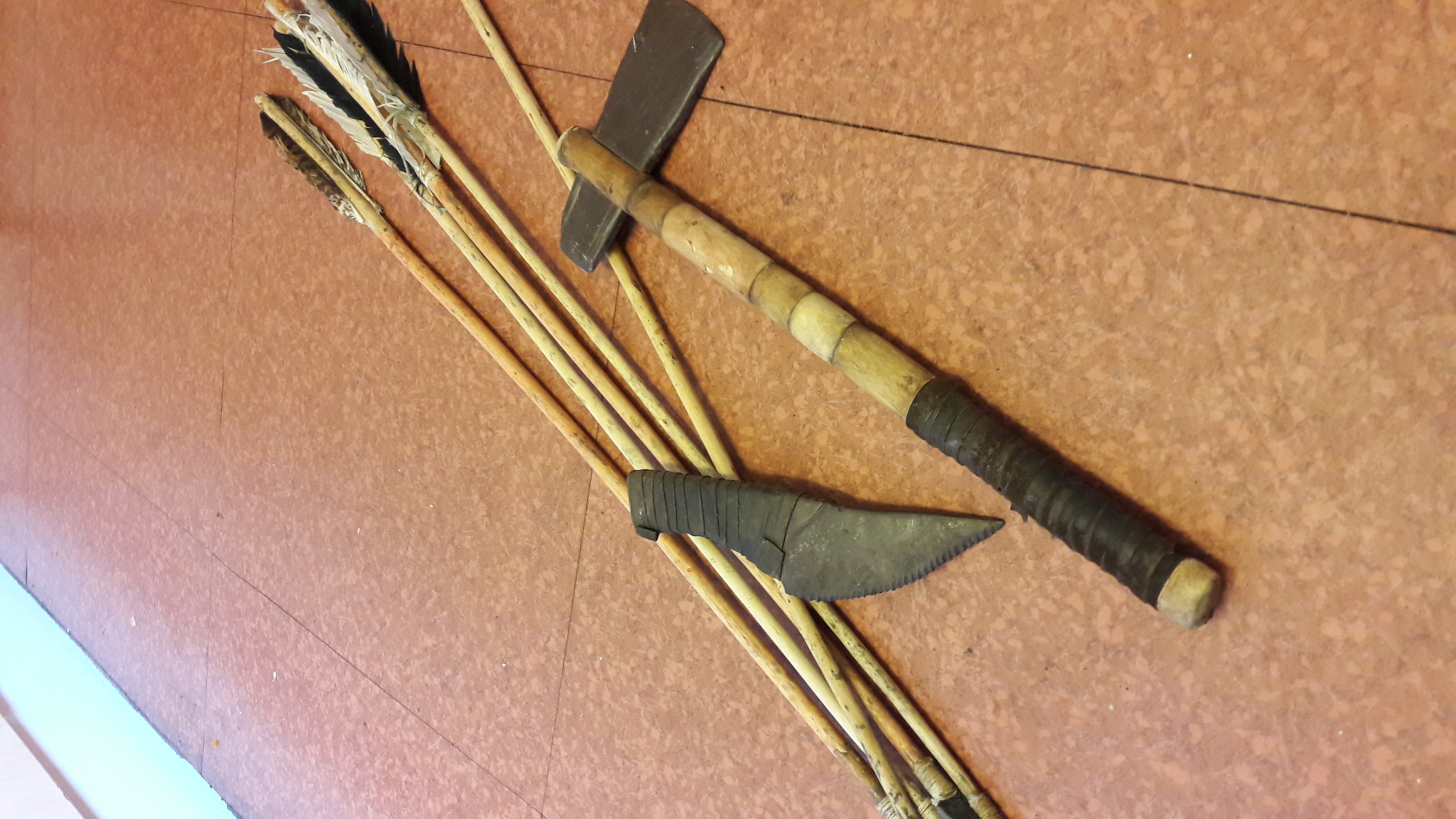 your stuff looks good, sinew would be more inline for your tying needs artifical sinew is kool stuff for this if the real stuff ain't around, check out the ''HOODLUMS FORUM'' for more survival info

Ian you have hidden talents ! Zombie knives and Jurrassic arrows and axes

Guns for show, knives for a pro!
Top

Thanks whippersnapper my freind .
I reverted back to my caveman self but armed with a swiss army tool.
Peter good to hear from you my mate ,i made these many years back just to see if it was possible ,got some funny lòoks in the woods when dog walkers went past and i was tooled up with these.

I hope your both well and thanks for the comments and for looking.

All the best
Ian
Top

What talent! You did a MARVELOUS job on EVERYTHING! It is so good to see you flourishing in a society that suppresses such genius!

A tip of the hat to you my brother! More, more!

Keep it up!
Fishtail Picklock
Top

Sometimes we forget how lucky we are in the state's! I live in Indiana where it is a shall issue state, so if your not a felon, wife beater, or been to a court ordered rehab they have to grant you a ccw permit. Within the last two years they made switchblade knives legal too. What a country!
Top

I learned meat cutting from a German butcher about 55 years ago. He had nothing but scorn for cleaver butchers. Use a saw srape the saw and bone residue away with your knife. Disjoint chickens and never break a bone. I can cut a chicken and slice through cartilage and never touch solid bone with my knife edge. If you like bone splinter in your meats then use your cleaver. You may even get a finger into your mix.
Top
Post Reply
14 posts • Page 1 of 1