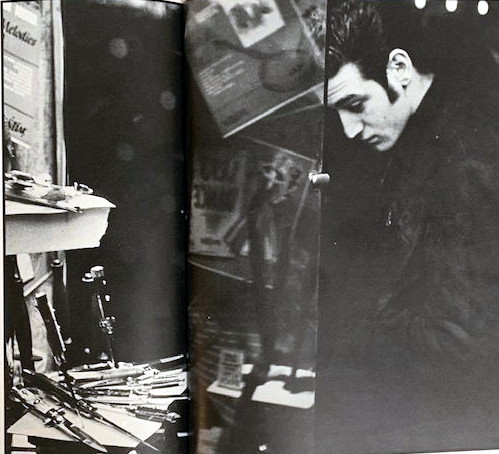 I found the magazine "Woman's Home Companion" that has the well-known anti- switchblade article, "The Toy That Kills", and helped push the Switchblade Act of 1958. This is a hard magazine to acquire these days. The article is mentioned in several books, such as "the Latama Legend". It is a long article and I am going to post it for anyone who wants to read it. A nice addition to any switchblade collection. 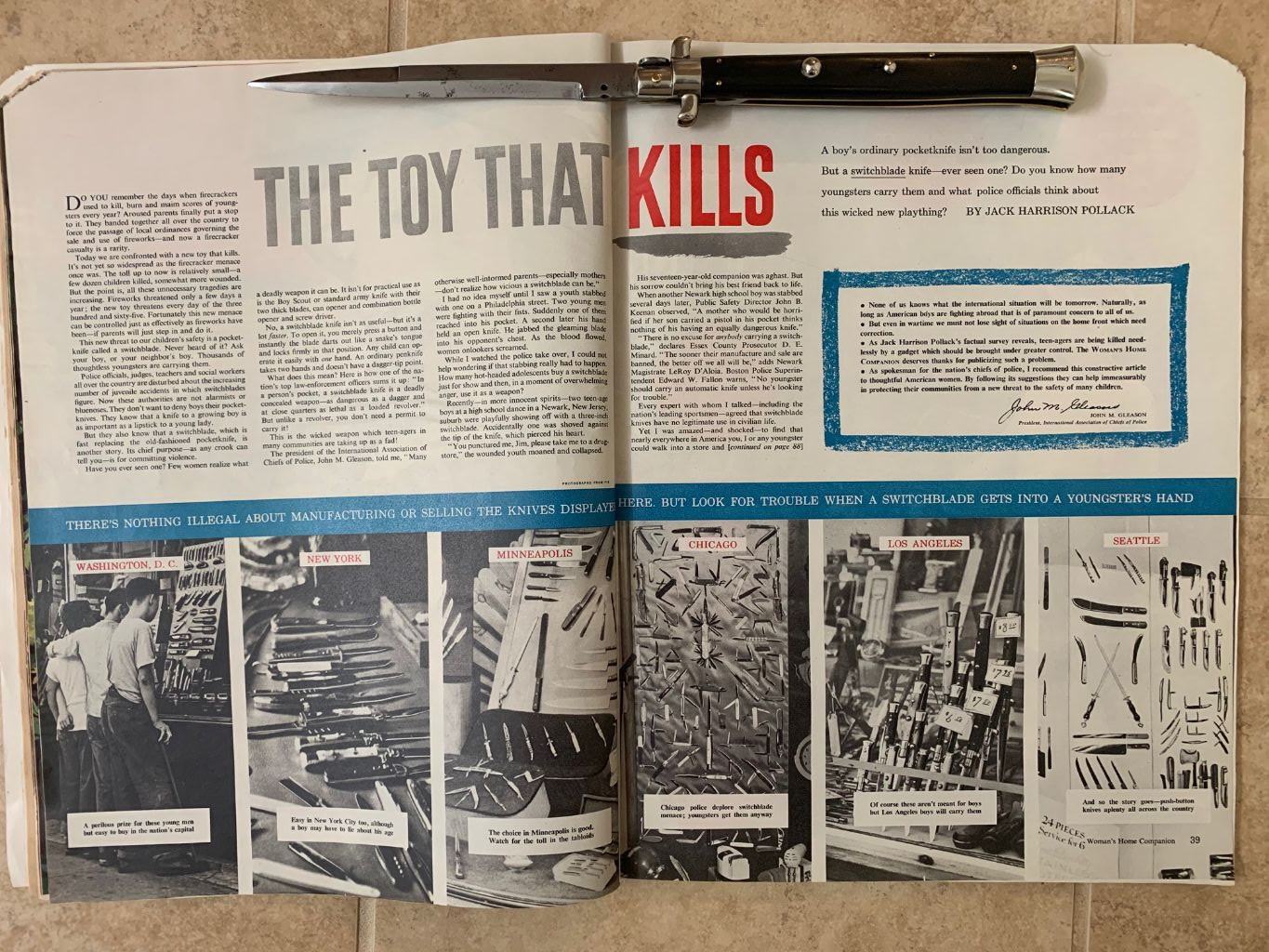 Here is the whole article. Please share your thoughts! 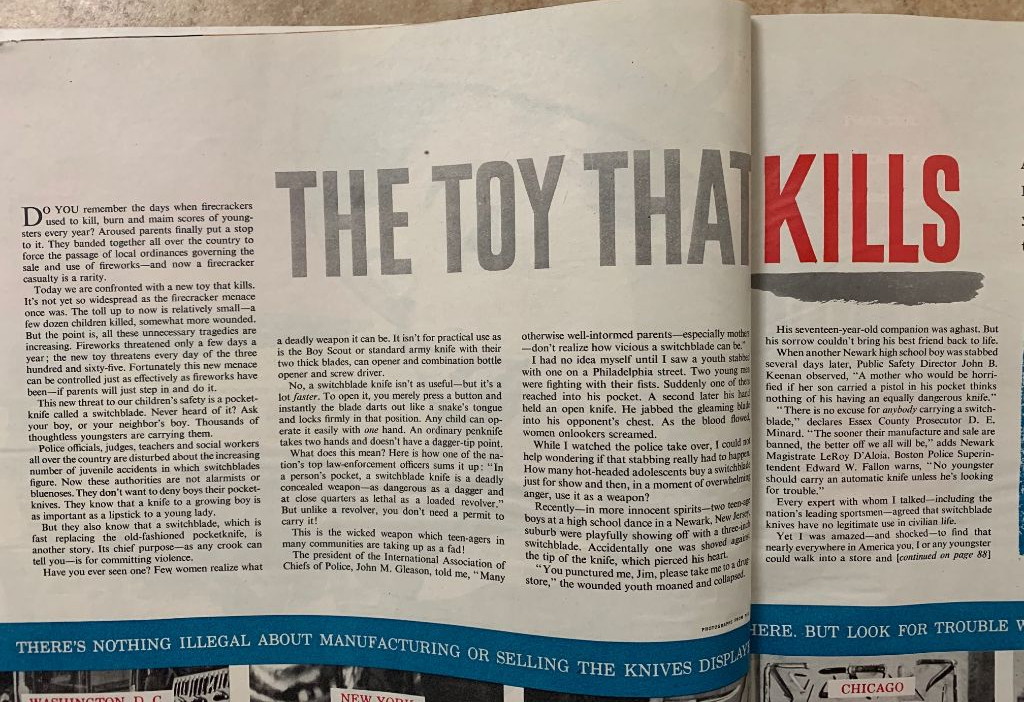 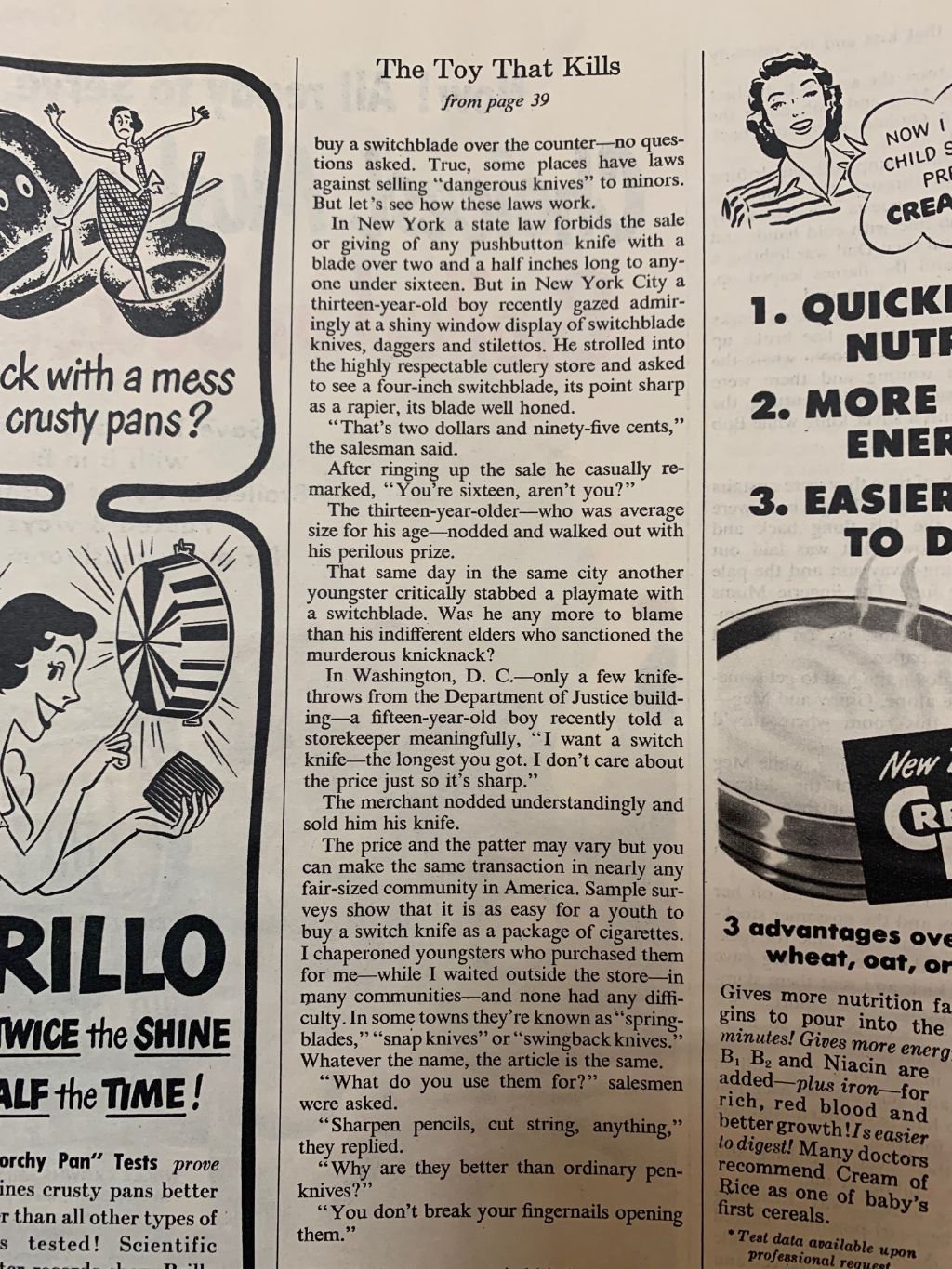 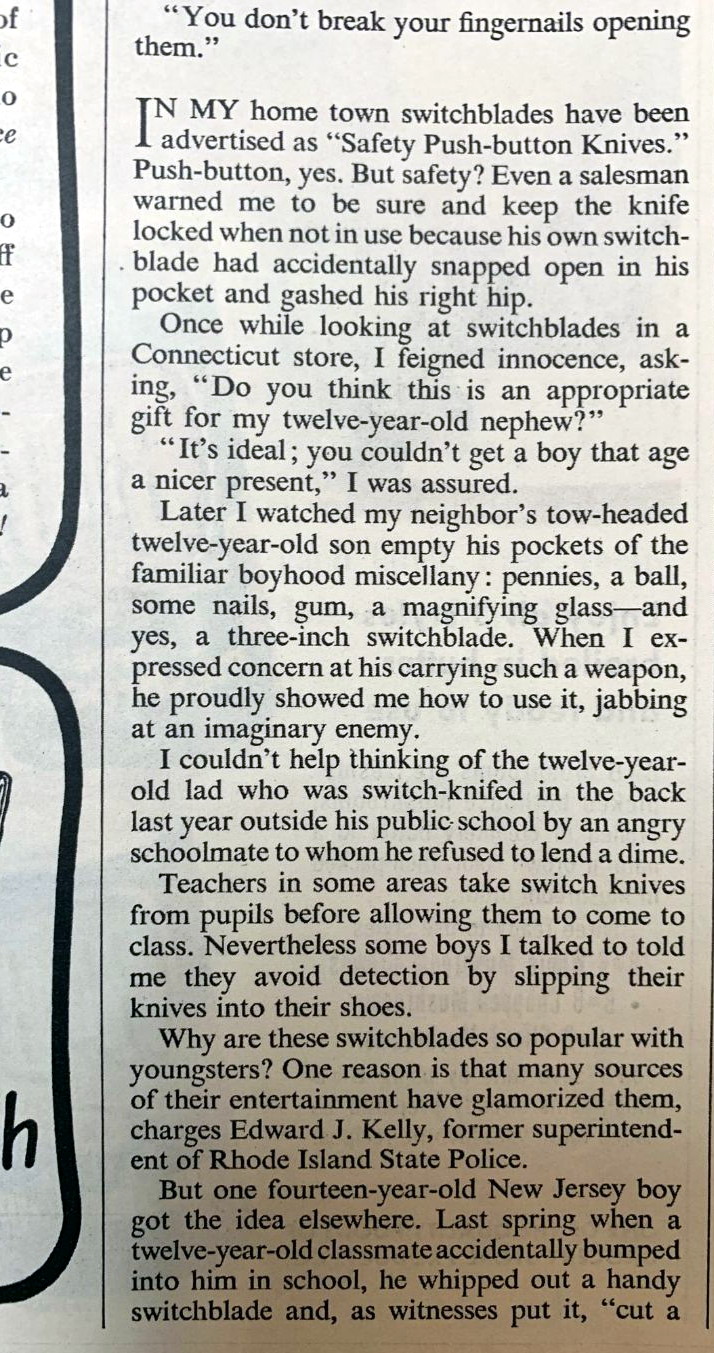 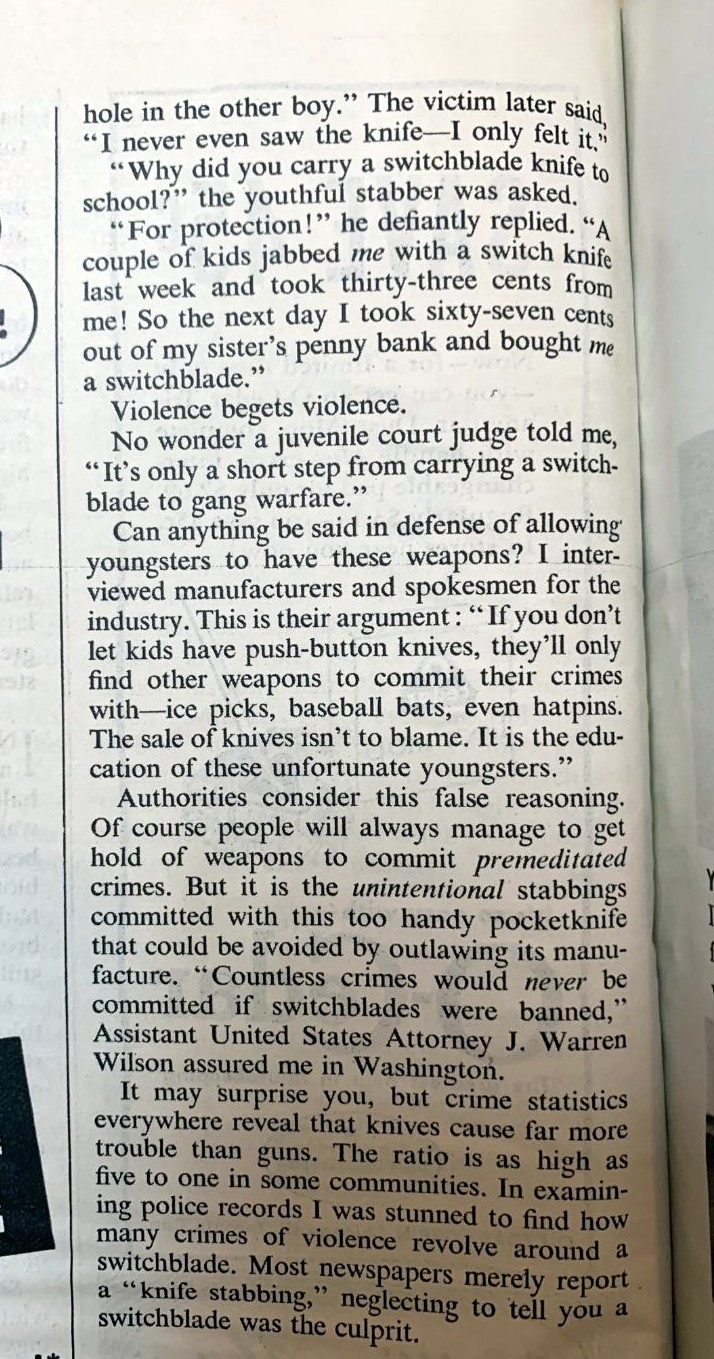 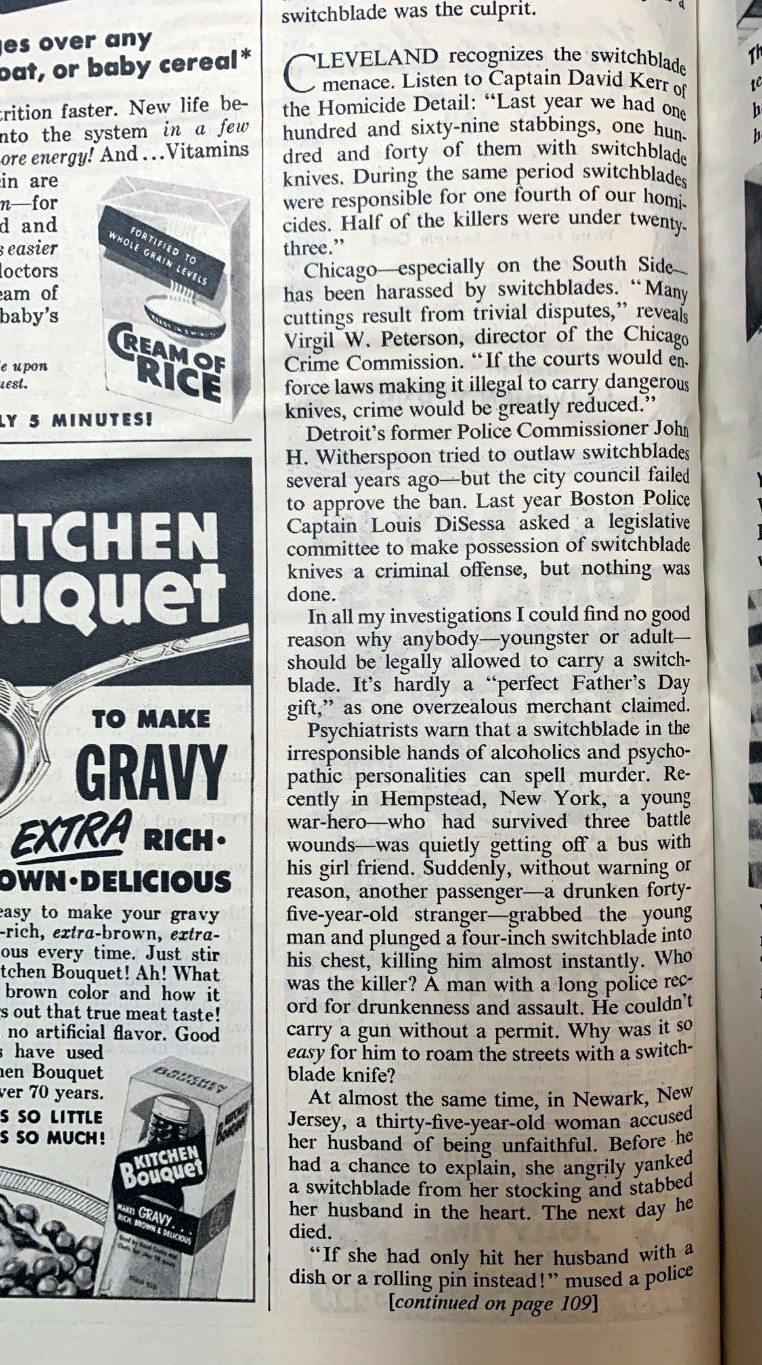 Peiper...thanks so much for posting this to share with us! I'm gonna' have a good read!

Thanks for sharing. I have read the article somewhere online but it's been a while.
Top

Yes, a classic. We should all give up our switchblades before everyone dies.

I've got a copy .. it's a great piece of history
Top

Thanks you for sharing, I've never seen this article.
Top

Thanks for posting this ridiculous historical article.
Your friend on the web's most friendly community on knives and blades,
John

This reminds me of an article I read some years ago that lists the top three concerns of teachers back in the 1950s -- I might be a little off on the specifics, but it was something along the lines of "Running in hallways; chewing gum; talking in class". Compare this quaint relic of history to today's urban schools, which are increasingly difficult to tell apart from hellhole lockups like Riker's Island.

I actually do believe that drying up the supply of spring-knives with the federal 1958 law probably DID prevent some stabbings. It really could have been the right thing to do at the time. But the intervening 62 years have seen such a staggering devolution in American society that --like the concerns over running in halls, or talking in class-- the petty concerns of yesteryear have been eclipsed by an avalanche of corruption, decay, wholesale violence, and criminal evil.

I can't begin to imagine what kind of society the continuing downward spiral will have created in another twenty years.
As dear little Tiny Tim sagely observed, "God help us, every one".
Top

Did the same person that wrote this article write "Reefer Madness?"

I carried a stiletto to school back in the 1960's. I've never killed anyone yet!

Sir,my I please have a pack of Marlboro's and a switchblade,sure son that will be $3.50 ,and have a nice day.
Top

What you waitin on? You need to shank someone.
Top

What pure Socialist claptrap! Raise your child properly, with a modicum of responsibility and self-control, and these problems tend to resolve themselves.
Fishtail Picklock
Top

You sure? Hard to expect such agendas penned by one of Harry Truman's own ghost writers!

The ultimate bill itself, I think, was probably about minorities more than it was about the knives themselves, but it was an easy way to point to such a bill and say "hey, we're making progress!", without truly addressing issues. Possibly the most striking statement offered by proponents of the bill came in the form of a question to a witness from Senator Frederick G. Payne of Maine, who asked “Isn’t it true that that type of knife, switchblade knife … was developed, actually, abroad, and was developed by the so-called scum, or the group who are always involved in crime?” I read this, and think almost instantly that it was in reference to the Italian immigrant population, most notably in New York City.

Every stereotype has a grain of truth, right?
Knee-deep in the hoopla...
Top
Post Reply
48 posts